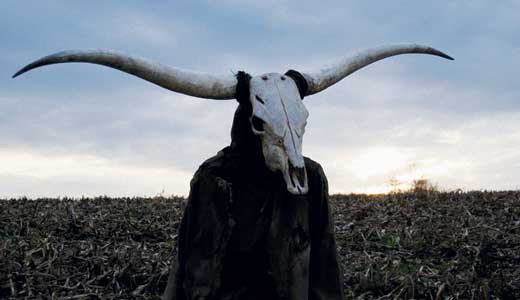 Alexandra Daddario (“Hall Pass”) and Michael Biehn (“The Terminator”) run afoul of a psychopath and his protégé in this garden-variety gross-out chiller. But the best thing about it is Brett Rickaby (“The Crazies”), who once famously said, “I’ve made a decent living being a guy people want to see bad things happen to.” And where did he learn that trade? Playing criminals, psychos and sleaze-balls for several years rat-cheer in Louisville at Actors Theatre! Co-stars Valentina de Angelis (“Gossip Girl”) and the always amazing John Savage.

The list of great musicians who were born in Louisville is extensive, but none is more beloved than the late Lionel Hampton. While best known for his groundbreaking jazz work on the vibraphone, Hampton also played the drums, toured with Benny Goodman, acted in movies, and was on the soundtrack of at least 28 others. This well-known jam session/concert has finally received a much-needed audio scrubbing, allowing Hamp and his bandmates — jazz royalty at its finest — to come through loud and clear. Excellent.

A gay romance/thriller about a pair of loverboys, one of who turns tricks in order to earn enough money for them to marry. But when one of his clients turns out to be a prominent religious leader, the guys hatch a deadly extortion plot with lots of graphic sex.

We’ve been doing this wretched column now for nearly 15 years, and this is the single most disturbing movie we’ve ever seen. A pair of teens out for a day of random destruction discover a young woman (Jenny Spain) chained naked to a table in the basement of an abandoned asylum. So they decide to make her their sex slave. Then they decide to kill her. Then they find that she cannot die! The shock of gore, violence and necrophilia will affect you far less than the way you find yourself identifying with her attackers. A deeply affecting film on many levels with a slam-bang climax. Highly recommended, but not for everyone.

This forgotten Ingmar Bergman film began its life as a four-part TV movie starring Liv Ullmann. She plays a married psychiatrist who slowly falls victim to her own mental illness. The first time ever available on video in America; more than two hours long (originally almost three and a half), in Swedish, both dubbed and subtitled.

An extremely popular art-house doc from Lee Fulkerson (“Food, Inc.”) dissecting the effects of the American diet on our culture, suggesting that going vegan would put an end to hunger, poverty, war, disease and Republicans. Good stuff.

Blu-Ray release of the live-action version of a popular anime. A pair of buds get squashed by a train. Splat! But instead of dying, they find themselves in an apartment where a big Magic 8 Ball sends them out to kill aliens. Cool.

IN A BETTER WORLD

Now available on Blu-Ray, this popular Danish arthouser is about a young man with a complex, difficult and violent life who is befriended and rescued by a classmate. Together they look at the world from several different points of view after the first boy’s mother dies.

When you think of Chicago blues, you are thinking of Maxwell Street. It was here, in an open-air market, that black street musicians (many of them escaping the poverty of Southern farms) gathered to eke out a living, performing for spare change or groceries. This wonderful doc captures the tail end of that era when the likes of John Henry David, Coot Venson and Carrie Robinson pounded out a driving sound that would become forever synonymous with the Windy City. Highly recommended.

Disney’s runaway teen hit, à la “High School Musical,” with Aimee Teegarden (“Scream 4”) as the popular blonde stereotype who finds herself attracted to Thomas McDonell, despite her best efforts. Breezy, lightweight and fun with butt-scrunchin’ music by bands we never heard. Big Dumb Fun that even we can’t put down.

A terrific price for four of the best rock-docs we know. Contains “The Rolling Stones: Shine A Light,” “Bob Dylan: No Direction Home,” “U2: Rattle And Hum” and Neil Young’s sublime “Heart of Gold.” Seriously? You’re still sitting there?

This isn’t a “great” movie, but it is pretty good, and deserved a longer theatrical run. Shiloh Fernandez and the beautiful Ashley Greene lead an attractive teen cast whose lives center around a roller rink in the 1980s. Lots of boy/girl yearnings and societal boundaries make this as timeless as “Romeo and Juliet.”

This movie is a classic for two reasons: First, it is the prototypical Cold War thriller, set in Los Alamos after the atomic end of WWII, about a scientist (Gene Barry) whose son is kidnapped by spies. Second, it was a clever bit of government-sponsored propaganda, showing the scientists living ordinary, workaday lives amid the machinery and symbols of atomic death, helping to calm the public’s fears of the new Atomic Age. A bit pricey for b&w, but worth seeking out.

A thug (Clayne Crawford) robs a bank and decides to hide out at David Hyde Pierce’s little dinner party. Bad move, dude! To say more would be to spoil all the fun of this roller-coaster black comedy — but let it be said that you’ll never think of Niles Crane from “Frazier” the same way again. Very highly recommended.