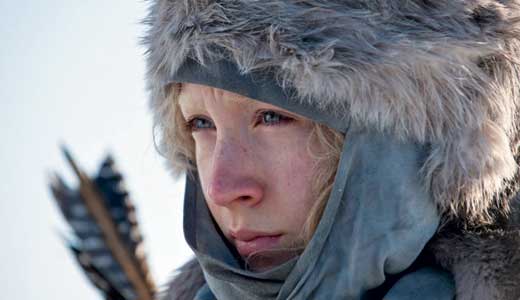 Saoirse Ronan of “The Lovely Bones” once again dominates the screen, this time as a daddy-trained 16-year-old assassin. While not entirely an original idea, this one stands out for its exceptional cast (including Eric Bana and Cate Blanchett), good script and quirky, original score by The Chemical Brothers. Our only complaint is the choice to aim this at the PG-13 crowd. The film’s topic and terrific set scenes clearly require an R audience to be fully realized. Still, a great little actioner; worth a look.

The seminal Sam Peckinpah movie, finally available on Blu-Ray. Dustin Hoffman is the meek, mild-mannered American who moves to rural England with his lovely bride, Susan George. There they find increasingly hostile locals who escalate their harassment when the couple doesn’t fight back. The climax, where Hoffman’s pent-up rage is vented on the men who raped his wife and now threaten their lives, is unforgettable. Our highest recommendation.

A CINDERELLA STORY: ONCE UPON A SONG

We liked this tweeny made-for-TV bunch of fluff largely because of its great cast. Lucy Hale (“Pretty Little Liars”) plays the wannabe recording artist, put upon by her evil stepmother, the awesome Missi Pyle (“Galaxy Quest,” “Two and a Half Men”) and step-sister Megan Park (“The Secret Life of an American Teen”).

A HORRIBLE WAY TO DIE

One seriously disturbed indie mad-slasher movie that can really draw you in. Horror vet A.J. Bowen plays the slasher, with freckle-faced cutie Amy Seimetz (“Wristcutters: A Love Story”) as the slashee. He’s just slipped out of a psycho ward and is looking to hook up with old girlfriend Seimetz, but how can he catch her attention? By butchering everyone who gets in his way, of course! A no-budget triumph.

One of the most inventive and original rock groups of the ’70s, America was often pegged as “folk rock,” largely due to their breezy, guitar-backed harmonies. But, as anyone who has ever seen their live shows know, that was just one aspect of their unique sound. This excellent concert flick, with special guest Christopher Cross, remains one of a scant few live recordings made before founding member Dan Peek’s untimely death in July 2011.

An exceptionally fine no-budget indie drama based on real events. Taking place largely in a single room, a beautiful young German woman (Nicki Aycox) is about to leave her war-ravaged homeland to live with her American fiancée when a police inspector enters the picture, asking about a missing child.

Will Ferrell makes a serious movie (as opposed to all those unfunny ones he’s famous for). Here he plays a successful upper-middle-class drone who loses it all to alcohol. When his wife finally tosses him and all his stuff out onto the lawn, he pretends it’s just a week-long yard sale to cover his embarrassment. But in divesting himself of all his crap, he rediscovers old friends and the world around him. While it won’t impress Ferrell fans, we kinda liked it.

When the president of the United States’ dog goes missing, the Secret Service panics. But the pooch is rescued by an orphan, bringing the boy the first real happiness in his life. Knowing that someone at the White House must be hurting, he runs away from his foster home to return the dog. Just as gosh-golly-gee heartbreaking as it sounds with Eric Roberts, Tiny Lister and Pricilla Barnes.

Michael Chiklis is the big draw in this TV series about an average, everyday family that accidentally gains superpowers. Whoops! A good little show — often dismissed as “The Incredibles” meets “The Fantastic Four” — that hasn’t drawn near the audience it deserves. With Julie Benz as the mom, and Kay Panabaker and Jimmy Bennett as the arguing teens.

RETURN OF THE KILLER TOMATOES

If you’ve never seen the original “Attack of the Killer Tomatoes,” then you live a soulless, pitiful existence. Correct that, THEN check out this wonderfully cracked sequel with John Astin as the crazed Professor Gangreen who turns angry ’maters into human-shaped veggie warriors. And the best of the bunch is Tara (the vastly underrated Karen Waldron), who must either enlist or destroy the pizza-delivery guy who figures out their nefarious plot. P.S.: Watch for George Clooney, resplendent in his ’80s mullet. Really!

Finally available on DVD, this love letter to punk fans features riotous performances by Sonic Youth, Dinosaur Jr. and Nirvana. The extended opening jam of “Schizophrenia,” in particular, far exceeds the album version: raw, unpredictable and completely unrestrained. Fans of SY will fondly note that this was filmed before they had all their original damn-near-destroyed equipment famously stolen. A time capsule of angry musical mayhem from a few years before the death of Kurt Cobain.

This is one of our favorite bikini movies for one reason: Barbara Ann Moore … or is she two reasons? While Babs was 30 years old when she made this, she easily passes for every man’s high-school-cheerleader fantasy with her big eyes, big boobs and big blonde hair. It’s all a plotless excuse for topless dressing room and shower scenes by Moore, Kathy Pasmore, Anastasia Rova, Karli Allen and the always welcome Shauna O’Brien. Breathtaking.