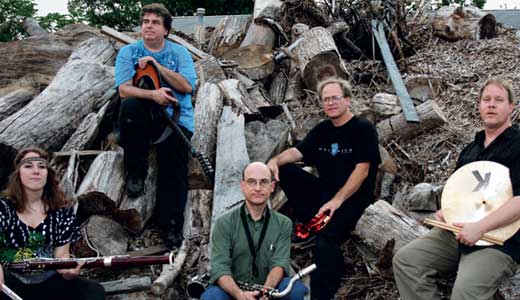 Ut Gret (pronounced “Oot Greet”) has been playing eclectic, thought-provoking music for three decades. They describe themselves as “a pan-idiomatic world music and free improvisation ensemble.” The Louisville band continues to push boundaries with its new release, Radical Symmetry.

Longtime member Steve Roberts refers to the album as “the culmination of the last decade of work with the band.” Although it is just hitting the streets now, it was recorded in 2009. Plans are already under way for new recording sessions to commence this fall.

The original version of the band was formed by Joee Conroy in 1981, while he was living in California. Early band influences included jazz modernists such as Ornette Coleman, Cecil Taylor, Miles Davis, John Coltrane and Evan Parker. Conroy was joined by David Stilley and James Potter in the primary incarnation.

The essential lineup these days is Conroy on string instruments (including bass, guitar, violin and viola), Roberts on keyboards and trumpets, Steve Good on clarinets and sax, and Gary Pahler on drums and percussion. Cellist James Vaughn and flute/sax player Gregory Acker no longer rehearse with the band, but plans are for them to be on a new recording project. The newest member is Jackie Royce, who plays bassoon and flute, and was highly praised by both Conroy and Roberts.

Conroy considers “Infinite Regress,” on Radical Symmetry, to be a “masterpiece.” This 16-minute composition owes more to modern classical music than jazz or rock. Conroy was concerned that “when James and Greg left, I thought we would never play it again. The cello counterpoint was crucial, and there were sax and flute parts. But Jackie loved the piece and wanted to play it, and, in two rehearsals, she covered all the cello parts and sax parts with the bassoon and did the flute parts as well.”

Over the past several years, Ut Gret has frequently included dancer Ruric Amari in their performances. Having a dancer “made us become a lot more focused,” Conroy says, and “made us want to compose more emotionally satisfying music.” Roberts adds, “The compositions are more through-composed (written out), more conceptual, more planned.”

Roberts also notes the influences of other cultures on the band, mentioning Acker’s “For Viswa” and Conroy’s “Cobra in a Basket” on the new disc. “For Viswa” is an eight-minute raga, while “Cobra” sounds like psychedelic belly dance music. Other influences include British progressive rock bands, such as Gong and King Crimson, and Frank Zappa.

No story about Ut Gret would be complete without mentioning the underlying mythos of the band. As chronicled in liner notes and elsewhere, the band is apparently descended from an ancient, roving band of musically inclined barbarians. Conroy likened the substory to that of famed British band Gong, whose members were characters in leader Daevid Allen’s visionary historical allegories.

“We have covered quite a lot of territory since 1981,” Conroy says. “We have been an electronic group, an acoustic group, a jazz group, a world fusion group, and performed only on Gregory Acker’s homemade instruments. Longevity affords a wide range of exploration, and that is the primary emphasis — wanting to hear music you have never heard before.”