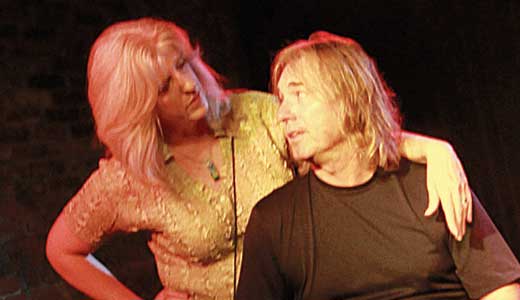 After six years of working as a promoter in Louisville, Rebecca Kessler decided to take on a new challenge: venue owner. While showing off her new club, it becomes clear that she’s still figuring out some of the finer details — like the soundboard. Does she know how to use it? “No, not at all,” she laughs. “I do know how to turn on the lights!”

That’s fair, considering Uncle Slayton’s, which Rebecca co-owns with her husband, Bill, has only been open since March. The two of them make up Pilgrim Productions, a concert promoting and booking partnership originally based in Bloomington, Ind., before the two relocated to Louisville. “There were some gaps in the music scene here,” Rebecca says, adding that they “jumped right in on the national level” and began booking shows before buying their own location.

A small venue downtown on East Broadway, Uncle Slayton’s focuses primarily on Americana and folk, with a bit of rock ’n’ roll brought in when it fits. These, according to Bill, are the sounds that make sense in the venue’s space: a building that’s longer than it is wide, with exposed brick walls and rafters. Those who frequented the location this time last year may not recognize it from its previous incarnation as Skull Alley.

“People who have been to Skull Alley can’t believe the change,” Rebecca says, adding that when they got the space, there was chewing gum and graffiti decorating the floors and walls. Unlike Uncle Slayton’s, Skull Alley was all-ages, all the time, and was frequented by a lot of teenagers. “It could get pretty hardcore,” she says.

Rebecca says that while Uncle Slayton’s hasn’t tried to connect with the target audience of Skull Alley, they do sometimes have all-ages shows. “You don’t want to ignore all-ages, but you can’t do it every night,” Bill says. “We were all that age at one time.” Still, he says, Uncle Slayton’s caters to an older crowd, with a small bar area (with a limited beer selection) and scattered tables and chairs.

The pair was considering ducking out of the business altogether when the opportunity to buy the venue arose. Rebecca says that because the venue has a great location and offers them a kind of control they didn’t have as promoters, they couldn’t say no. She hopes to support local, emerging artists and offer something the city didn’t have before. “We’re not a bar or a restaurant first, we’re the only true small venue in the city. Locals deserve to sound good in their own hometown, and they don’t always get that.”

The two acknowledge they may run into some challenges in their new endeavor, but believe Uncle Slayton’s is unique, offering an alternative to other venues that, according to Rebecca, are bigger, something different altogether, or just plain “bad.”

The two say that by using social media and word-of-mouth promotion, Uncle Slayton’s business is growing, with new faces showing up at every concert. At the moment, this is Rebecca’s full-time job, but Bill also works full-time with safety and security at TARC. He says he often works long days and nights and gets little sleep while the pair learns by trial and error — but this isn’t a complaint. “The venue thing is completely new to us,” he says. “But if you have a passion for something, it’s not work.”

Uncle Slayton’s is located at 1017 E. Broadway. For a concert calendar and more info, check out www.uncleslaytons.com.