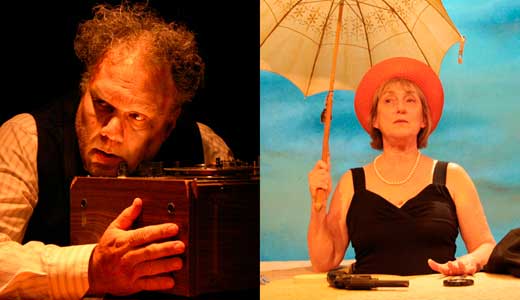 Allegedly, it was actor Cyril Cusak’s wife, Maureen, who told Samuel Beckett he should write a “happy play,” after “Krapp’s Last Tape” came out, to which the 20th century writer responded with “Happy Days.” Both are short, heavy pieces of a similar format. Considering Maureen’s request, it would seem that “Krapp’s Last Tape” is sad, and “Happy Days” might be more upbeat. However, neither piece’s mood is nearly that simple, and while “Happy Days” is brighter, more colorful and full of the word “wonderful,” I wouldn’t call it happy. Co-presented by Savage Rose and Masterworks Theater, a new local company, this two-for-one night of Beckett’s tragicomic work is heavy and challenging for both the audience and the artists, who handle it expertly.

At pre-show, all we hear is a soft ticking clock, a simple and appropriate sound as we sit before Krapp’s den, full of just a few carefully chosen set pieces, waiting for him to shuffle in. It’s his 69th birthday, and he follows his yearly ritual of recording himself commenting on the past year, after listening to a tape of a previous birthday — this year, he listens to the one he made on his 39th. For the first several minutes of the piece, not a word is spoken — we simply watch J. Barrett Cooper meander about the stage, and we learn a great deal about Krapp just from his movement, face and incredible use of silence. Cooper is solid and precise, and once the tapes start rolling, we are let in on some of Krapp’s deepest feelings — many conveyed just in Cooper’s expressions, as he listens to his own voice — laughing with himself, at himself, and reliving a beautiful yet painful time in his life. Be patient — the piece moves slowly (like Krapp) and requires careful listening and envisioning. There is little action, but Cooper manages to keep the audience with him.

“Happy Days” is structured similarly, with one person taking on an audience. There are actually two characters in this one — wife and husband Winnie and Willie, but Willie is almost entirely absent, even when he is seen. Winnie (Laurene Scalf) is buried to the waist in an impressive dirt mound structure onstage, surrounded by only a few possessions, and dressed in a simple, chic black top (or dress, we don’t know), pearls and a red hat. She talks on and on, frequently trying to get a response from Willie (Michael Harris), who gives her a few forced, half-assed words once in a while.

Scalf gives a captivating and energetic performance as a trapped woman trying to remain optimistic. For more than an hour, she speaks to us with almost no interruption, in a smooth, haunting rhythm, letting her sorrow leak through her mask of happiness. A crackly recording of Franz Lehár’s “Merry Widow Waltz” plays on repeat, which, along with Winnie’s literal entrapment and her black bag of “treasures and comforts,” make for compelling symbolism. I found this play the more heartbreaking of the two.

These plays contain almost no action and few laughs — just raw emotion and Beckett’s unique style of language, which makes for an uncommon and potentially uncomfortable theater experience, but it’s brilliant work all around.