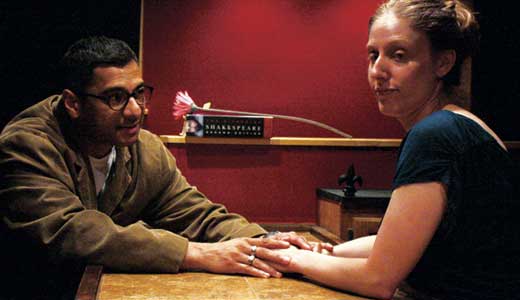 Not only is the 10-minute play the hors d’oeuvre of theater — quick, tasty and appealing — a night of them is an easy way to get a lot of people involved, which is precisely what Bard’s Town co-owners Doug Schutte and Scot Atkinson have done. To help break in the theater upstairs, which officially opened in May, The Ten-Tucky Festival will feature eight new plays fashioned by Kentucky artists.

“We knew we wanted to have local playwrights in our first full season,” explains Atkinson, “so we decided to kind of condense that into a trial run to test the waters with playwrights, and we developed a festival that would showcase playwrights, local actors, local directors.”

The process began with an online open submission for 10-minute plays, and according to Schutte, the results were a pleasant surprise — they received nearly 80 total, half of them from Kentucky.

“It was a little unnerving wondering how much talent would be out there and what we would get,” Schutte says. “I think that was the first time I realized how much talent was around the state, in the submissions that we got.”

From the Kentucky submissions, they selected eight pieces they felt would work well together, covering topics like missing grooms, the first marriage counseling session ever, Internet president wannabes, and disappearing Girl Scout Cookies. Once they settled on the line-up, rounding up the directors and actors to bring these pieces to life was no difficult task.

“You can tell a couple of people that we’re looking for actors, and all of a sudden, the word spreads and we’re full,” Atkinson says.

Among the playwrights are Nancy Gall-Clayton, a longtime local writer whose recent 10-minute piece, “The Librarian,” was part of Finnigan’s Festival of Funky Fresh Fun earlier this year. Her latest piece, “Encounter at the Ink Spot,” about a bartender and frustrated writer relationship, will debut at the Ten-Tucky Festival. University of Louisville professor Amy Steiger is directing the piece, and Gall-Clayton has gotten the opportunity to be involved in the rehearsal process, which, like the entire festival preparation, has been collaborative.

“A lot of unexpected things happen if you’re really open and you have a director like Amy,” Gall-Clayton says. “Everybody’s able to offer their suggestions during the process, and I think it’s going to be a better play for that.”

Aside from an emphasis on producing new, local work, part of the Bard’s Town’s mission is to welcome and accommodate other members of the theater community who have no place to go. In the coming year, groups including Finnigan Productions, Le Petomane, Looking for Lillith and Kentucky Shakespeare all plan on performing at the Bard’s Town.

“For anyone to think that two places serving as venues for local artists is too many in a city this large, well, it’s just wrong,” Schutte says, referring to the Bard’s Town and The Rudyard Kipling, a place for which Schutte says he is eternally grateful. “There could be five or six or seven, and there would still be folks who might have a difficult time finding space.”