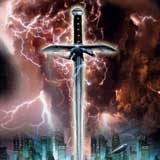 If there were an award for “Most Improved Player,” as if life were Little League, the emcee known as Dollaz Ova Hoez would be a contender. Stumbling out of the gate with his last, Dumb Haard, The Quickening marks the true debut of an artist deserving of the strong company Louisville has provided over the last two years. Mostly self-produced, D.O.H. shows an ear firmly rooted as a fan of hip-hop history. David Axelrod samples and Rick James hooks may be familiar to the cognoscenti, but here they are presented with a freshness as well as a subtle hat-tip. D.O.H. doesn’t take himself too seriously lyrically, but it’s not necessary here. The Quickening is ultimately held together with its cinematic interludes, and excluding one or two missteps in featured emcees, there are few complaints here. In the crowded landscape of high-quality releases in this area code, The Joker lives up to his court jester namesake, but let’s remember, Ol’ Dirty Bastard’s darkly comic Return of the 36 Chambers still stands as one of the Wu’s best solo discs.