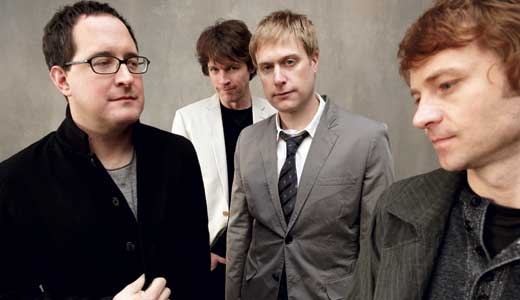 The pop song is the ultimate confessional. Stripped of equivocation, with little room for elaboration, pop songs have been confessing their writers’ secret desires since that first “baby, baby” rocked those early juke-joint crowds. Narrative songwriting, on the other hand, has long been the domain of the folk singer. Pop songwriters who employ narrative conventions — Dylan, Paul Simon, Springsteen — do so with their folk flags flying.

And then there’s The Hold Steady — a riff-driven rock band nobody would mistake for a folk act, with a dedication to the fictional narrative that definitely stands out in the contemporary pop landscape. Weaving an expansive set of interwoven tales heavy on violence and betrayal, frontman and lyricist Craig Finn crafts each song as a novel in miniature, compressing a full story complete with heroes, villains, conflict and uneasy resolution into the briefest of forms.

“As a reader, I always loved how Raymond Carver was able to tell a lot of a story with not that many words,” Finn says. “With a pop song, there’s only four minutes or five minutes and only so many lyrics you can use to tell the story, but you also want to imply some stuff and let the listener fill in the rest with their own story.”

Finn’s characters experience fully the tension between virtue and circumstance; they are haunted by visions and tempted by excess. The Hold Steady’s second record, the 2005 concept album Separation Sunday, offers the most comprehensive narrative of a girl’s exile and return to Minneapolis, complete with a metaphorical resurrection climax.

There’s good reason Finn eschews the confession for the fictional narrative. He freely admits that a single built around eating a sandwich and watching some baseball — his typical day off — wouldn’t yield such dramatic results.

“Those songs would be very boring,” he says with a laugh. “One of the reasons why I wanted to write more cinematic songs is those are the stories I’d rather read or listen to.”

The Hold Steady’s sound has evolved since their 2004 debut Almost Killed Me — lately, Finn has been singing more and shouting less, and the departure of keyboardist Franz Nicolay led to subdued keys and bigger guitars (former Lucero guitarist Steve Selvidge now plays alongside lead Tad Kubler) on their fifth full-length album, Heaven is Whenever, released last year by Vagrant. They expect that trend to continue when they head into the studio this fall to write and record their follow-up.

“We want to try being a guitar band for a while,” Finn says.

For now, they’re back on the road after a four-month break. Though the band often tries out new songs on the road, Finn says they aren’t quite ready to debut new chapters of the story.

“We’ve been off for a few months, so our energy will probably be spent on rehearsing rather than writing for this tour. But you never know. I’m kind of hanging back and seeing what we come up with when we all get in the same room. Everyone’s well-rested but very energetic and excited to get out there and play.”

Read more of LEO’s interview with The Hold Steady at bluecat.leoweekly.com.