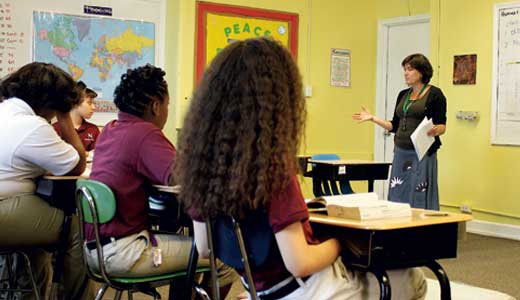 Nine girls plop down on a rug and sit in a tight circle. The seventh-graders toss a stuffed dog back and forth. One girl briefly fiddles with her friend’s hair. Minutes later, giggles erupt when the adult in the room attempts the chorus of “Paper Planes” from M.I.A. This is not a Saturday night dispatch from some basement slumber party where mom’s just peeked in.

It’s a late Monday morning on the second floor of Nativity Academy at St. Boniface, a small, Catholic middle school that strives for the safe, friendly setting of home, but with rigid, parochial expectations.

The stuffed dog being passed ensures only one student talks at a time. The adult is Ms. Jenny, Nativity’s religion and peace teacher. And her reference to “Paper Planes” is an anecdote embedded in a larger lesson on the Ten Commandments and how our modern culture can act as mortar and pestle to those ancient fundamentals.

Nativity is in its ninth academic school year. Started in 2003, the middle school located on East Liberty is one of 64 Nativity schools across the country. The model, originating in New York City’s Spanish Harlem 40 years ago, provides a faith-based, private middle school with single-gender classes. School starts at 7:45 and doesn’t end until 5:45 four days a week. Summer classes are mandatory. Its charge is to serve a small group of low-income, urban families.

“We are for people who want a private school and can’t pay for it,” says Nativity principal Meghan Weyland. “We’re different from other Catholic schools because we’re not tuition driven.”

Ninety-four percent of the student population qualifies for free and reduced lunch, meaning a family of four making roughly $40,000 or less could apply. About 95 percent of students are African-American. Families pay $20 a month for a child to attend.

Almost since its inception, Nativity has faced obstacles.

The school was built to serve the teems of children who lived at the nearby Clarksdale housing complex, but by 2005, that public housing project had been demolished. The fulcrum of Nativity’s mission was gone.

Given Nativity derives funding almost entirely from donations, the last few years have been a struggle, with donors paring back their financial commitment as the economy soured.

A turn-of-the-century brick building houses Nativity Academy. St. Boniface, Louisville’s oldest Catholic parish, sits right next door. In the mid-1990s, under the directive of then-Archbishop Thomas Kelly, St. Boniface started an outreach program to its neighbors in Clarksdale, including an after-school education program.

Sister Paula Kleine-Kracht, who helped open Nativity Academy, says kids stopped attending the afternoon tutoring around the sixth-grade. In 2001, Kleine-Kracht met with the Rev. Tim Hogan, former pastor of St. Boniface, about creating a school that would target the needs of those children living nearby who were slipping away from structured academics.

Nativity’s first class of 16 students was almost all from Clarksdale, Kleine-Kracht says. But that changed when the Louisville Metro Housing Authority won HOPE VI grants that allowed them to tear down Clarksdale and revitalize it with a mixed-income housing development. While the Metro Housing Authority lists Nativity in its HOPE VI application as a great asset to the proposed new neighborhood, in reality the number of families living in what is now called Liberty Green significantly decreased. Over the past few years, the school has had just one or two students from Liberty Green.

“When we opened the school, my understanding, and I believe Father Hogan’s understanding too, was we’d primarily be serving the Clarksdale community,” Kleine-Kracht says. “But of course, that changed after they leveled it.”

She’s pleased to see a safer neighborhood, remembering a day when she witnessed an armed drug deal from her office window.

West End resident Ava Porter heard about Nativity through one of her daughter’s friends.

“I thought it was just for rich kids,” she laughs. Porter remembers the application process as rigorous: letters of recommendation, proof of income, testing. (Nativity will take kids who are a few grades behind in reading and math, but does not accept special education students due to a lack of resources to meet their needs.)

Without school bus service, Porter knew she’d have to drive her daughter or send her on a TARC bus. She says the commute is worth it. Her daughter, who is now in seventh-grade, was bullied at her old school because of her weight. But at Nativity, a middle school with a total enrollment of 55-70 depending on the year, that sort of behavior is not tolerated.

Funding Nativity can be tricky. It’s not an Archdiocese of Louisville school. A parish does not provide 5 to 20 percent of its funding, like in most Catholic schools. The school has about 35 sponsors who donate up to $10,000 a year to pay for a child’s tuition.

In addition, the Ursuline Sisters of Louisville and Xaverian Brothers each kick in $30,000 a year. Grants and other donations help fill out the budget. Carol Nord, Nativity’s new executive director, has worked in a handful of Catholic schools and says it’s been a dramatic shift to realize that more students does not result in an influx of tuition fees.

A 2009 article posted to the Archdiocese website read in part: “The downturned economy is an ever-present and foreboding reality for not-for-profit schools.”

It went on to quote Kleine-Kracht, who said, “We’ve already begun to hear from foundations that are saying, ‘We can’t award grants at last year’s levels.’”

As a result, Kathey Golightly Sanders, Nativity’s director of development, says the school has dipped into its reserves. This year, their fundraising goal is $1 million in order to replenish those funds.

“Our goal isn’t for them to graduate middle school,” she says. “It’s to get them out of high school and pursue post-secondary education.”

So far, Nativity has had two groups of alumni go through high school. Out of the 27 students, Sanders says only a few didn’t earn a high school diploma. Nearly all went on to college or a trade school.

“It’s the fork in the road, developmentally and socially,” she says.

On a recent Monday before lunch, Weyland greets students in the stairwell, talking over their echoing voices. With so few students, the names come quickly. She says standing amidst this daily traffic helps steer kids in the right direction.

“The kids just feel it. I see it in the sixth-graders like, ‘Oh! They know who I am and what I like to do on the weekends,’” she says. “There’s an intimate connection with families and kids.”