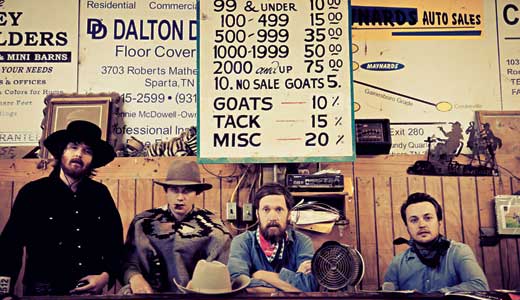 At least that’s how frontman Matt Pelham describes the indie-pop-rock gems the Nashville-based band has been delivering for almost 17 years.

“We keep things really simple and sort of a little bit more caveman,” Pelham says. “It seems like there’s a lot more stuff now that’s way more atmospheric and complicated. I like simple, straightforward pop songs. Hopefully other people still do, too.”

The singer-guitarist suggests The Features fall somewhere between “mainstream and hipster,” saying, “I always have a hard time with that because I don’t know where we fit in as a band or how we’re perceived. I feel like we’re sort of a little bit more pedestrian than a lot of things that are going on.”

In addition to talking music, Pelham weighs in on his aversion to tweeting and the wonders of quirky local rockers Wax Fang.

LEO: What bands have influenced you?
Matt Pelham: I’m a huge Dylan fan. I’ve always had a soft spot for bands like The Kinks and a lot of standard stuff. I grew up listening to a lot of classic rock that I’ve gone back to over the years, whether it’s John Mellencamp or Tom Petty.

LEO: How does Wilderness differ from previous albums Exhibit A and Some Kind of Salvation?
MP: Musically, and as far as the songs go, it’s really similar — shorter pop/rock songs. I feel like it changed more on the audio end … I feel like we captured more of what we’ve been trying to go for. Exhibit A was a little too raw, and Some Kind of Salvation could have been a bit more raw. I feel like we kind of split the difference on this one.

LEO: Favorite song to perform live?
MP: My favorite is “Big Momma Gonna Whip Us Good” off Wilderness. It came together really easily, and those tend to be my favorites — the ones that don’t take much time to sort out.

LEO: What’s it like for a non-country act in Nashville these days?
MP: Nashville has always had a really good rock scene, but I feel like it’s gotten way more attention in the past four to five years. The reasons are obvious: We have Kings of Leon now, and Jack White, and more recently, The Black Keys. When we started out in, like, ’94 in that area, I don’t think anyone cared at all what was coming out of Nashville. Definitely in the past few years, people have started to take more notice.

LEO: I’ve seen you perform with Louisville’s Wax Fang a few times. How did that come about?
MP: We love Wax Fang. They’re great guys, and we like what they’re doing. We played with them the first time several years ago in Chattanooga. From that we ended up doing a tour with them and The Whigs, which was fun. They are probably my personal favorite band in the area.

LEO: Best and worst part of the music business?
MP: The worst part is feeling this pressure to be completely exposed … I guess growing up, I felt like there was something really nice about mystery to music, or to any sort of art, and to leaving things to the imagination … We all just love playing music and that’s what we want to do, but everything that goes with it now — like tweeting — not so much. I understand people wanting to know what’s going on with the band, but I haven’t really embraced the publicity aspect of it.

And the best part is just being able to do what we like to do. We’re not spring chickens, so the fact that at our age we’re still able to play music at all is really good.