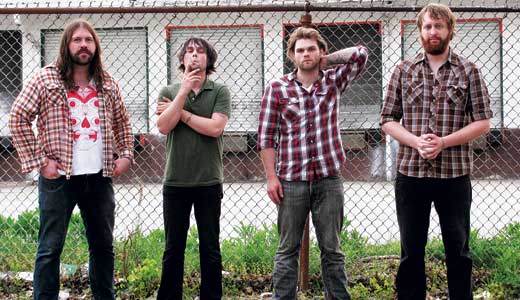 Visually, Tony Ash and Billy Bisig make an interesting combination. The linebacker-sized Bisig makes the compact Ash seem even smaller by comparison, Mutt and Jeff in a rock ‘n’ roll package. The Jagger & Richards of Louisville’s Trophy Wives had no choice but to start a band together.

“Billy and I had known each other for a few years. We had a ton of mutual friends, we were influenced by a lot of the same music, and we were really into one another’s bands at the time,” says bassist Ash. “Eventually, we realized that we were each dissatisfied with our own bands, and we wanted to start a new project that was devoid of bullshit, that was enjoyable, and that everybody involved with wanted to do full time, rather than as a hobby or distraction.”

Drummer Geoff Paton joined next. “We played as a three-piece for a year or two before (guitarist) Elliott (Turton) entered the picture. To tell you the truth, I don’t even remember how Elliott came to be involved in the band,” laughs Ash. “He just came to practice one day and never left. I think he charmed all of us.”

The quartet bonded over shared goals and influences. Local bands like Crain and Rodan — as well as the Seattle scene of the early ‘90s and Touch and Go bands like The Jesus Lizard and Laughing Hyenas — inspired Trophy Wives’ approach.

“I don’t know exactly where we fit in,” says Ash about their place in the local scene. “I don’t know if that’s necessarily a good or a bad thing, either. I sometimes feel like the younger kids don’t give us a fair shake because we’re not ‘punk’ enough or whatever, and the older crowd doesn’t take us too seriously because we’re not ‘indie’ enough, whatever that means. We occupy this weird middle ground somewhere in there, and that’s fine. But I definitely grew up being a part of the local punk music scene, and I appreciate it for what it has taught me over the years and for at least somewhat shaping me into who I am today.”

The group is dedicated to sharing their songs with people here and there. “When you’re a relatively new band going on the road in the beginning, it’s a given that you’re going to experience both good and bad shows,” Ash says. “We’ve played in New York City to hundreds of people, and we’ve played in Indianapolis to one drunk guy who shouted at us. It’s all a gamble.”

Two months ago, the touring gamble almost led to tragedy. While in Austin performing with his other band, Waxeater, Turton was severely electrocuted on stage.

“He spent several days in the ICU of a hospital there. It was a pretty serious, scary ordeal for everyone who knows him,” Ash says. “But thankfully, he is home, doing very well, and he will most definitely be on stage with us on the 12th. Can’t kill the chill.”

Touring has resulted in good fortune, as well. Multiple shows in Chicago led not only to a sizable fan base there, but also to a record deal. Dan Hanke, head of Latest Flame Records, liked what he saw and is now releasing the debut Trophy Wives album, Old Scratch, on Tuesday.

“I think the biggest lesson I’ve learned is that you can’t force or necessarily expect anybody else to be on the same page as yourself,” Ash says. “Some of us eat, sleep and breathe our music, our art, our whatever, and it’s all we want to do all of the time. Others might enjoy playing music or creating in their spare time, but have other priorities like raising a family or focusing on a career. And that’s not a bad thing whatsoever. In a way, I envy those people. But for those of us who fall into the former category, and don’t know how else to live, it’s wise and in our best interest to seek out other like-minded individuals. Anything else will just lead to disappointment.

“We’re just going to keep going and going, and whatever happens, happens. Drive it until the wheels fall off, get some new wheels and keep going.”