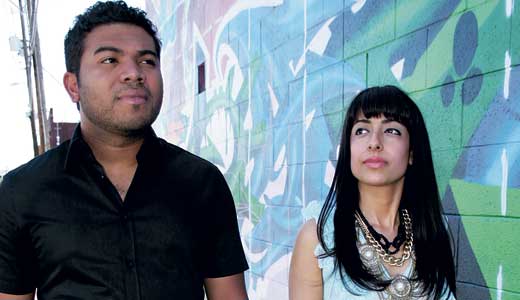 Hanging out with members of Jacuzzihidive in their rehearsal space, atop the third floor of a converted office building in the down-and-dirty industrial section of Las Vegas, is an interesting contrast. The view of the neon strip is beautiful; otherwise, the band, which specializes in ebullient dance-rock, seems wildly out of place in a city wracked by the real estate collapse, where unemployment is rife and most homeowners are underwater.

Although the band draws plenty of inspiration from its home base, Jacuzzihidive is a cosmopolitan unit. The band’s mastermind and songwriter, Aram Blassingame, was born in the Philippines, grew up in New York City and cut his electro-rock teeth in the Orlando club scene. Blassingame had met his musical partner-in-crime, Puerto Rican-born frontwoman Aily Iglesias, in high school. The two moved to Sin City in 2007 to begin the project that would eventually become Jacuzzihidive.

“I used to think dance music was cheesy,” Iglesias says. “I believed music had to be dark to be uplifting — Tool, Audioslave, Joy Division. I loved digitalism, but it wasn’t until Aram sent me mixes that I learned how powerful this music can be.”

Although a late synth-rock bloomer, Iglesias has always been a latent electro-diva and is infamous for her wardrobe, which includes cellophane dresses. She grew up listening to Gloria Gaynor, the queen of disco, so it was only a matter of time before the Jacuzzihidive vocalist began to channel her pop instincts.

“I was denying myself for way too long,” she laughs. “Rediscovering Parliament-Funkadelic helped me find who I was meant to be, too.”

Like P-Funk, Jacuzzihidive brings the party. Armed with a vast array of vintage Casio keyboards and Roland drum machines, the band — now touring as a trio, with the new addition of hardcore punk drummer Cameron Isham — serves up a sonic smorgasbord of everything that was good and fun about ’80s dance-pop. Jacuzzihidive members, however, bristle at the idea of being labeled “retro.”

“We’re trying to encompass all the different kinds of music we enjoy,” insists Blassingame, whose résumé includes stints in indie rock and grindcore bands. “With Cameron playing live drums now, it adds a new dimension.”

The band’s Night Creatures EP runs the gamut, from the “Borderline”-era Madonna bubblegum of “Turn You On” to the funky, stormtrooper-booted bassline of the instrumental “Crowded City,” to the arty, fractured chillwave of “XO Skeleton.”

Jacuuzihidive are doing it DIY-style, playing South By Southwest last year based on word-of-mouth (as opposed to label-generated) hype.

“Getting signed is still important to bands,” Blassingame says. “But often signed bands can’t back up the hype. We’re a baby band. We don’t want to be here-today-gone-tomorrow, so we’re taking it slow.”

The priority right now is making sure the van doesn’t break down en route to Louisville, where the band’s music has been played on WFPK-FM’s “Night Visions” program.

“We met some Louisville people three years ago, and the city has a great scene,” Blassingame says. “We fixed the radiator leak, so we should make it just fine.”