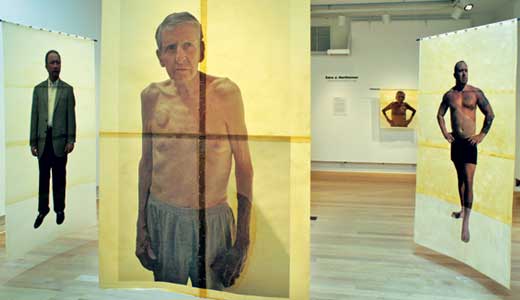 Style Weekly’s Mike Rutz says, “Could a band named Crushed Purple play anything else but psychedelia? We think not …” And with stage names like Dr. Animal, Lauren Lizard, Sippy Cup and Yosagi Yojimbo, we’re inclined to agree. Richmond-based Crushed Purple — known to the real world as Lauren and Mark Hines, Justin O’Neill and Jim Noonan — play an experimental blend of psychedelia and rock, often singing about “crystals and shag” and other remnants of a bygone era. But this is not your typical throwback band — their bio quotes a William Blake poem and their lyrics are charmingly eloquent, as they sing about “flowers of morning light” and “children (with) flowers blooming in their eyes.” This group on the rise is bringing their groovy tunes to east Louisville, the Eastern Seaboard and beyond. —Jennifer Harlan

On Thursday, the Shamrock Pet Foundation is holding its 15th annual Art for the Animals fundraiser. This swanky party and art extravaganza benefits the Shamrock Foundation, which works to end pet overpopulation through rescue, spay-neuter services and adoption. Regional and national artists including Rodney Hatfield, Jeaneen Barnhart, Jennifer Zingg and Kasha Ritter have contributed a diverse mix of pieces to the live and silent auctions, from abstract paintings to equestrian statues. Or, if you’re in the mood for something slightly more cuddly, you can take home one of the adorable adoptable animals at the event. With live music by Sarah Stivers and yummy finger food from Louisville favorites Molly Malone’s, Blue Dog Bakery and more, it promises to be an enjoyable evening for a great cause. —Jennifer Harlan

If Oprah gave me a car, I’d probably sell it on eBay. But if she gave art-car enthusiasts a set of keys, they’d probably waste no time adorning jewels, spray-painting flowers or assembling a clown face on the roof. For 10 years now, KMAC has played host to hundreds of art cars parading up and down the streets of Louisville during the first weekend in August. The Kentucky Art Car Weekend features art car-related exhibits, a chance to meet the artists and see the quirky vehicles up close, workshops and a parade (2:30 p.m. on Saturday down Frankfort Avenue). Kicking off the event Thursday night is a drive-in movie event on the Waterfront Wharf (next to Joe’s) where a series of art-car films by Scott Scarboro will be shown, as well as a sneak preview of the documentary “Art Car: The Movie.” Necking is encouraged but optional. —Sara Havens

Congratulations, Storefront Congregation fans — the wait is over! After their debut album, which Louisville Music News deemed “so full of high points that it would require a surveyor’s transit and crew to measure them all,” fans begged for a follow-up. Enter Kaleidoscope. With their Americana melodies and down-home style, this group (whose sound includes mandolin, banjo and more) plays a great mix of original pieces and familiar covers. Their wide range of musical backgrounds, from orchestra to bluegrass, lends itself to innovative arrangements and beautifully crafted songs. This is comfort music, played with a deep sincerity and intimacy akin to front porch jam sessions. After Storefront Congregation’s first album was released, Bluegrass Unlimited declared, “Gracious, does this (quartet) show promise!” That promise is fulfilled on Kaleidoscope, a record that is, above all, about four friends doing what they love. Tyrone Cotton opens. —Jennifer Harlan

Butch Rice doesn’t remember when the music started. Car rides to his grandparents’ house, evenings around the player piano — his life has always had a soundtrack. A longtime fixture on the Louisville music scene, he’s played with everyone from Edwin McCain to Vanessa Carlton. Rice’s music is deeply personal, touching on themes of love and loss, and is sung in a sweet falsetto. His new album, Acoustic Pop, is no exception. One track begins, I’ve been standing on the ceiling looking for ways to love you. Another declares, The stars will be home to you and the sun will see that the moon has been holding you and you belong to me. The gentle strummings of his acoustic guitar hum along beneath his soulful vocals, which rise to a fever pitch as he cries out his loss and hurt. —Jennifer Harlan

There was a time — say, 1988 — when you believed all of your problems would be solved as soon as you became an adult. You’d have a fabulous job (in toy development, of course) and live in a spacious loft apartment filled with arcade games and bunk beds for sleepovers. You’d have that giant floor-mat keyboard from FAO Schwartz and a girlfriend — what more could you want? But then a certain Tom Hanks movie made you gun-shy around those creepy mechanical fortune-telling heads, and now that you’re an adult, you can see it’s not all foosball tourneys and Silly String fights, let alone cool jobs and hot women. Feel like breaking out in song yet? Music Theatre of Louisville wraps their summer season with the musical adaptation of “Big,” directed by Andrew D. Harris and choreographed by Megan Bliss. Although 1988 is gone, haunted carnival attractions are forever. —Erin Keane

Wayside Hotel at Second and Broadway

As a child growing up in Louisville, Rita Cameron sat on the front porch to watch storm clouds roll in. Now, she brings her childhood daydreams to life in ethereal canvases, cerulean skies that melt into ocher sunsets and evergreen trees. With brushstrokes as fluid as the fleeing clouds of Cameron’s memory, the work is deceptively tranquil. The gentle colors camouflage emotion: “I want the viewer to visually step into the painting and experience it … (to) relate to the piece in a personal way,” she says. Amanda Church’s work is also based on childhood experiences “in a family of artists (surrounded) by artwork (and) abundant art supplies from the beginning.” Like Cameron, she draws her subject matter from the Louisville scenery, but her interest lies not in vague landscapes but in places. Her nostalgia is contagious as she immortalizes familiar Louisville landmarks. —Jennifer Harlan

Get in close. Thaniel Ion Lee’s ink drawings on paper have so much detail that to fully see everything, you really don’t have any other option. His fantastical images certainly are busy; your eyes will be, too, as you look at all he has to offer. It’s intriguing to know he begins each new work trying to draw the perfect circle. That must be a bit maddening, with the result apparent by the title of this exhibition. “(I wanted) to simplify (my) technique and do what (I) would have done as a 17-year-old, if a 17-year-old knew anything about art history,” he says. He’s inspired by Surrealism, Abstract Expressionism and Sol LeWitt. Another strong influence is the ever-popular Hieronymus Bosch’s “Garden of Earthly Delights.” —Jo Anne Triplett

Before inventing the light bulb (and 1,093 other things, according to the U.S. Patent and Trademark Office), 19-year-old Thomas Edison worked as a night-shift telegraph operator for Western Union in Louisville. The budding genius got fired for conducting on-the-job experiments, and he promptly packed up the room he rented on East Washington Street and left town. Today, the restored Butchertown shotgun house where Edison resided in 1866 serves as a museum highlighting the life and achievements of this prolific inventor. On Saturday, the Thomas Edison House will host its biggest fundraiser of the year in an effort to generate half of its annual operating budget, which funds tours and educational programming. The 15th annual Edstravaganza includes cocktails, hors d’oeuvres, live music and a silent auction. —Sarah Kelley

Louisville’s first LGBT Film Festival kicks off this weekend with a party at U of L’s Floyd Theater (at 7:30 p.m.); screenings of the top films begin on Saturday and continue on Sunday at the Clifton Center. Presented by the Kentucky Fairness Alliance, the fest will feature more than 30 short, documentary and feature films from near and far. Organizers sought international, national and regional submissions in the spring and received more than 74 entries. Ten local judges, myself included, sat through many hours of film to select the best. “The goals of the festival are to celebrate and build understanding,” says David Corbett, co-organizer and KFA board member. “The response to our calls for sponsorships and partnerships has been promising. We hope this year’s festival is the first of many more to come.” —Sara Havens

The three galleries in U of L’s Hite Art Institute are a treasure hunt — you don’t know what you’ll find in them until you round the corner. The Belknap Gallery features artists’ books gleaned from the Bridwell Art Library. The library’s a treasure, with its more than 300 rare and special books. Joe McGee hasn’t made it to Egypt, but his art has and is in Gallery X. His work is “a visual conversation of the massive change taking place in our world, not just Egypt” he says. “I see the Sphinx as a symbol of the greatness humans can achieve.” Finally, U of L’s first doctor in Humanities is Sara Northerner; a portion of her dissertation is on display in the Covi Gallery. —Jo Anne Triplett

If you spend every minute in front of a laptop, iPhone or high-definition television, chances are your eyes need a break. “Oasis: Refuge” at PYRO Gallery, featuring 35 new works by Corie Neumayer and Susan Moffett, may be just the ticket to getting your vision back on track. Highlighting nature’s colors, lines and shapes, the show includes paintings and woodblock prints along with Moffett’s vibrant pastel portraits. Popping off black paper, Moffett’s bright drawings are realistic depictions of a woman’s appearance post 30. And you know what? They’re beautiful. The opening reception is Friday, Aug. 5, from 6-9 p.m. concurrent with the First Friday Trolley Hop. So put it in your Google calendar. Your eyes will thank you. —Mali Anderson