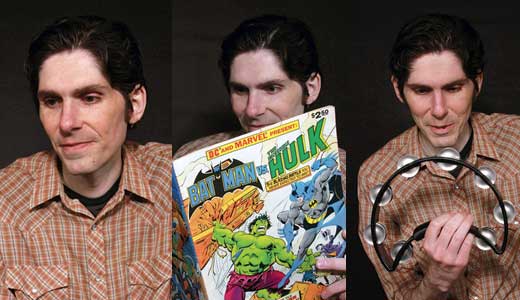 Your Soul and Mine

“Oh, God of dust and rainbows, help us see,
That without dust the rainbow would not be.”
—Langston Hughes

Musician, poet and activist Gil Scott-Heron passed away on May 27, 2011. He created an urgent hybrid of jazz, soul and blues that was unusually farsighted, earning him the titles “The Godfather of Rap” and “The Black Bob Dylan.” While not entirely comfortable with any label (preferring the musical description “bluesologist”), his uncompromising lyrics and powerful beat-heavy tracks inspired artists like KRS-One, Public Enemy, The Clash, Eminem, Outkast, The Roots and Michael Franti. He fearlessly addressed racism, corporate greed, apartheid — topics rarely discussed in popular music in the ’70s. The legendary tracks “The Revolution Will Not Be Televised” and “Johannesburg” (the latter co-written with gifted composer Brian Jackson) are full of frustration, humor and humanity — and still sound incredibly current. His novels and vocal performances drew inspiration from fellow revolutionaries The Last Poets, and his songs combined the raw honesty of the blues, the muscular funk of James Brown and the lyrical urgency of Allen Ginsberg and Langston Hughes.

Gil Scott-Heron belongs in that rare group of songwriters that expand our consciousness: Marvin Gaye, Bob Marley, John Lennon, Curtis Mayfield … yet his battle with addiction, legal troubles and a struggling career almost silenced him in the ’90s and early 21st century. Thankfully, he was prolific leading up to 2010, when he released the album I’m New Here, a critical success. Wildly diverse, the album was a chance for new audiences to directly connect, considering his early music was so liberally quoted and sampled by fellow innovators like Kanye West, Dr. Dre, Black Star and MF Doom. He recently had two early novels reprinted by Canongate UK. In their book review, The Washington Post remarked, “Gil Scott-Heron has been committed to examining those facts of the human condition that most of us would rather forget … he is an artist who has crafted witty but crucial insights for Black America.”

I spoke with Matt Anthony, host of WFPK’s “Friday Night Sound-Clash,” about Gil Scott-Heron and the current artists carrying on his mission.

LEO: You’ve played Gil Scott-Heron on your show quite a lot. It’s hard to overstate how ahead of the time his music was … the lyrics are so confrontational.
Matt Anthony: I did a retrospective, and I chose to go with 30 minutes. I didn’t know if listeners could handle it for a full hour … still, even now. So, I did just a half-hour … and the response was overwhelmingly positive. I was like, “There I go … underestimating people again.” People are really catching up to Gil Scott-Heron. We’re just now getting his music a quarter of a century later — “Oh, now I see the art and intelligence, and I’m not just frightened by it …”

LEO: I first heard his Greatest Hits around ’88. It’s wild that his music could resonate with a suburban kid in Louisville.
MA: Yeah, he just transcends. When the definition of treason is expanded — when speaking against governments, accusing them of war crimes or profiteering or racism is treason, you need someone to speak up. So you have comedians and musicians step in and tell these “stories.” The comics are like “I’m just joking,” musicians are like “It’s just a song,” and they get a slight pass in our country. I just did a show about Gilberto Gil and Caetano Veloso; they were kicked out of Brazil for their music, exiled for a year. Sometimes the musicians get it, too.

LEO: There’s a strong lineage from Gil Scott-Heron to bands like Grandmaster Flash and Public Enemy. Talking about things that couldn’t get coverage, cutting through the artificial boundaries of conventional news and media. I really can’t think of another song in 1970 as provocative as “The Revolution…”
MA: Oh, it’s still completely relevant.