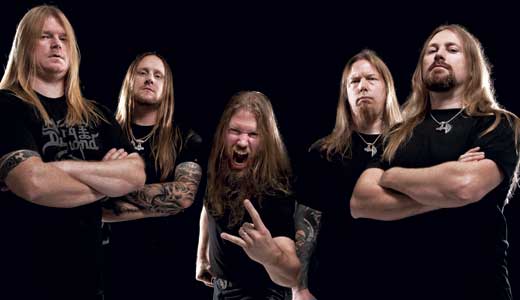 Whether you want to classify them as Vikings, hobbits or death metal pioneers, Stockholm’s Amon Amarth want to challenge your ideas. The ever-evolving band of warriors returns to Louisville’s metal-loving South End on Tuesday, infecting their fans with increasingly melodic yet still-heavy tuneage from their ninth album, Surtur Rising, in addition to well-loved classic hits from their 20 years together.

LEO spoke with leader Johan Hegg, who — to this reporter’s ears — speaks like a “Die Hard” villain.

LEO: Are audiences any different in Scandinavia than in the U.S.?
Johan Hegg: (laughs) Metalheads are metalheads.

LEO: For those of our readers who don’t know much about metal, what sets Amon Amarth apart from others?
JH: From the category of music we grew out of, which is death metal, we are a very melodic band. I think that’s something that’s very different. There’s also a melancholy to our music, which is actually very unique.

LEO: The new album was inspired by the Surtur legend, is that right?
JH: It’s not a concept album, no. There’s only two songs like that on the album. It’s a pretty fascinating story behind that, really — it deals with the end of the world and all that follows. It’s a very violent part of the story, but also very sad, because even the hero dies.

LEO: Do you do a lot of reading that influences your writing?
JH: Yeah, I read a lot on different topics. But a lot of stuff that influences my lyrics is everyday stuff — stuff that happens in the world or in my life in general. It doesn’t necessarily have to be Norse mythology — although, I’m a huge fan of that history and use it as a metaphor for the topics I want to discuss. I don’t really want to preach to anybody, but the things I bring up in my lyrics are usually not that interesting to anybody but myself (laughs).

LEO: Do the other guys in the band know what you’re singing about?
JH: Some get it, some don’t … I don’t care (laughs).

LEO: You said you don’t want to preach, but you write a lot about religion. How do you feel about the role of religion in Scandinavia versus in the U.S.?
JH: Having been over to the U.S. many times, I can tell that religion is a bigger part of people’s lives, in general, than it is here. This country is much more secularized than the U.S. is. It also depends on where in the U.S. you go; you go to the major cities, it’s less so. That’s also kind of the same over here.

LEO: How do you feel about the role of religion here, as opposed to in your country?
JH: Personally, I don’t like the form religion has taken. The institution of the church as something to allow people to have spiritual enhancement is just bullshit. I don’t mind if you believe in God, go ahead, but you shouldn’t have to go to church to be interested in that — it’s just bullshit. I think what religion is today is mainly a power tool for people to keep other people in control.

LEO: Do you ever have problems with people telling the band, “You can’t do this” or “You should try to do something more commercial”?
JH: No. Never happens with us, actually. We’ve been with Metal Blade Records now since 1997, and we’ve always had a good connection with those guys. They love metal, and we are, by far, not the most brutal band they’ve signed. So we’ve never had any discussions on that stuff, no.

LEO: What can we look forward to with your live show?
JH: We’re doing a very aggressive and gritty show. We’re performing the new album in its entirety, and then we come back after a short break and play other stuff. It’s two-and-a-half hours of music, and it’s a very energetic and great show. We’re looking forward to getting back to Kentucky, it’s been a while.