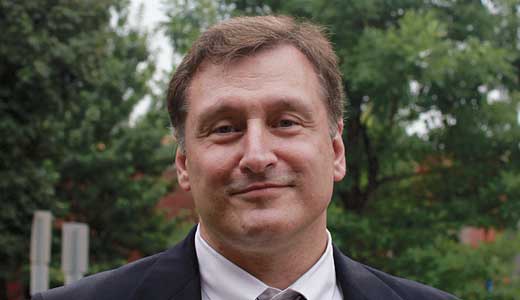 In the television show “Kitchen Nightmares,” viewers marvel at the work of high-powered, seriously caffeinated master chef Gordon Ramsay as he ventures to failing restaurants across the country in an (often profanity-laced) effort to revitalize them, transforming them from cesspools of culinary doom into properly functioning, well-managed beacons of gastronomical delight.

Although Dewey Hensley’s soft-spoken, profanity-free and thoughtful demeanor bears no resemblance whatsoever to host-provocateur Ramsay, the former’s new position with the Kentucky Department of Education will charge him with a similar, albeit more humanitarian, task: administering a new division to turn around the commonwealth’s 22 failing schools — 13 of which are in Jefferson County — to provide a better education for Kentucky’s most at-risk students.

In June, Hensley left his post as principal of the Portland neighborhood’s J.B. Atkinson Academy for Excellence in Teaching and Learning to take a job with the state’s newly minted Office of District 180, which aims to replicate Hensley’s past successes by providing teachers with more resources, connecting students with social services and nonprofits, and enabling schools to offer flexible approaches to education — a strategy almost unthinkable in the current political climate dominated by anti-teacher bias and the supposed panacea of private charter schools.

“What I’m attempting to do is to create an identity where (District 180) becomes an elite network of educators where they can learn best practices and strategies and belief systems for helping kids with great need, essentially training them and giving them the tools to help kids in communities where these failing schools are located,” Hensley says.

“It was very much a bittersweet decision,” he says, “leaving behind the structure and teachers and, particularly, the kids in that community. I really had a strong bond with the Portland and West End communities … but I felt I could have a larger impact in the state if I took this role. It’s really about doing important work for kids all over the state of Kentucky.”

Although he had received (and turned down) numerous offers for jobs across the nation, it wasn’t until Kentucky Education Commissioner Terry Holliday personally approached Hensley to apply his 18 years of experience statewide that he considered pursuing a position with the department.

“Dewey is an excellent choice for this position, because he brings great knowledge and experience in the areas of school turnaround and improvement,” Holliday said in statement trumpeting Hensley’s new job. “A key area of focus for this agency is helping low-performing schools improve outcomes for their students, and Dewey has the hands-on experience needed to guide our work.”

That “hands-on experience” has already paid dividends for Hensley’s former school. By the time he arrived at Atkinson in 2006, reading and math scores for fourth-grade students were a dismal 26 percent and 30 percent, respectively. Four years later, reading scores rose to 47 percent, and math scores jumped to 52 percent. The success is in large part due to Hensley’s “whole child” approach to education, which links educators and students with nearby social services — including a partnership with the University of Louisville, which broadens Atkinson’s educational resources and ultimately demands more parental involvement in their child’s academic life.

According to Hensley, none of it would be possible without a shift in thinking about poverty as an impediment to education.

“People forget when they talk about poverty that we have to stop thinking about it as a barrier to education and begin to think of education as a solution to poverty,” says Hensley, whose native Eastern Kentucky is no stranger to economic hardships. “If you take on that mindset, your actions are different. It opens up possibilities you wouldn’t have considered otherwise.” Indeed, with statewide unemployment hovering just under 10 percent, the Office of District 180 has its work cut out for it.

But Terry Brooks, executive director for Kentucky Youth Advocates, thinks that’s exactly why Hensley is the perfect man for the job.

“I’m not usually accused of being a cheerleader for the Kentucky Department of Education,” Brooks says, “but in this case, they have really hit a home run for all kinds of reasons. First of all, Dewey has established a strong record that he is passionate about helping vulnerable kids by not just talking the talk. He actually walks the walk. Secondly, he approaches daunting problems in unconventional ways.

“I believe that Dewey understands the power of what I’ll call ‘non-cognitive’ measures,” Brooks continues, meaning that most reforms focus too much on what goes on inside the classroom at the expense of dealing with the economic realities outside of it.

Brooks also believes Hensley’s experience in working with poor rural and urban schools gives him the versatility necessary to tailor his approach in given academic contexts. For example, since rural schools are more physically isolated from social services than their urban counterparts, Hensley plans to offer virtual classrooms to students for whom traveling to and from alternative or after-school programs is too difficult. Another solution is to create partnerships between the faculty of failing schools and state universities, thereby connecting teachers with resources otherwise unavailable.

While Hensley will commute to Frankfort from his Louisville residence, he does not plan to languish behind a desk.

“I won’t be spending much time in an office,” he says. “My job won’t be very Frankfort-based. I’ll be visiting the schools and supporting the educational recovery staff, going wherever I’m needed.”

He says he hopes to implement improvement plans by the beginning of this school year and is currently interviewing applicants for positions within District 180’s Division of Student Success.

“I’m working hard, but I’m still trying to get my brain wrapped around everything,” he says. “I’m confident that with some time, we’ll hopefully start seeing some positive results.”