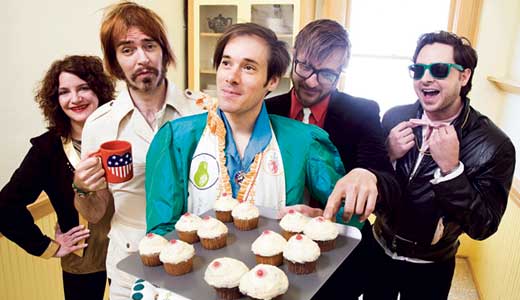 If the mark of a true artist is an inability to sit still, to repeat something just because it worked once, then — even if for no other reason — of Montreal bandleader Kevin Barnes is definitely an artist.

Even those not in sync with of Montreal’s ever-shifting directions would have a hard time denying Barnes’ abilities, though. Including Barnes himself.

“Everything I write is poppy; there are elements that are always melodic,” he says of his songwriting, laughing and seemingly embarrassed by a skill many would like to be burdened with. “I’m always trying to explore different possibilities. It’s more exciting, because I’ve written so many dance-y pop songs over the years, so I’m always looking for new inspiration, looking for new directions to go in. I don’t ever want to be a self-caricature. I want to constantly evolve.”

Barnes is in total control in the studio, a place he goes to every day. On tour, he has a small studio in the back of his bus.

LEO: How much writing can you get done on the road?
Kevin Barnes: Not very much; usually, when I’m touring, I write a lot more lyrics than I do music.

LEO: Do you collaborate with others while you’re out together touring?
KB: Not so much … I don’t really do that much collaborating.

of Montreal began in the mid-’90s, one of many psychedelic pop bands associated with the Elephant 6 collective based in Athens, Ga. Like another fan of psychedelia, Prince, of Montreal has evolved toward becoming a high-energy funk band in recent years. Their latest record, The Controllosphere, was “definitely influenced by Parliament and a lot of funky stuff, and also incorporating a slightly noisier element to things, experimenting with that … Trying to get out of the super-catchy pop trip that I’ve been on for a while now,” Barnes says.

LEO: How challenging is it to balance funk with noise that’s hard to dance to?
KB: I guess it all depends on what you want to do. When I’m making music, it’s definitely coming from a more selfish place, exploring my own psyche. I mean, I do release records because I do, on some level, require affirmation or whatever it is. Also, because I’m excited about it and I want to share it with people. But I don’t really think that much about, “Oh, this song’s going to make people dance,” or “This song’s going to make people sad.” With the dancing thing, with my music, there’s lots of starts and stops and key changes, tempo changes, that really go against what you consider “dance music.” Most dance music is repetitive, you’ve got to keep the groove going, but a lot of times I just get bored. Within 30 seconds, I want it to change, come up with something different. So I’m definitely not the best writer, in that way, getting people on the dance floor and creating a party. But that’s not really my goal … The only thing I really think about is wanting to give the audience something exceptional. I don’t ever want to go on stage and have it be flat and lame and uninspired.

Of Montreal is known for filling their concerts with colorful costumes and props, and Barnes is more willing to give up control when it’s time for the show.

KB: Oh yeah, you have to dive in at some point. By the first or second show of a tour, it’s pretty obvious, “Oh, that thing we wanted to do with that one costume is stupid, it’s just not working.” None of us have any problem with that, we just want to do something that feels right and feels good. Whether it’s completely opposite of what we originally envisioned doesn’t matter, because the main goal is just feeling good about the show.

LEO: So where is the future taking you, music-wise?
KB: I’m kind of in a strange place right now, artistically, making a lot of songs that I’m not really sure how people will feel about them; I think they’ll probably turn a lot of people off and maybe bring in some new people. I guess that’s just how it goes. I feel like more artists should take more chances. A lot of people just figure out something that works and just do it till they burn out on it. I just want to keep taking chances, trying new things, staying vulnerable and staying excited.