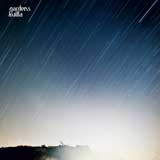 The songs on the Santa Barbara-based Gardens & Villa’s debut album are mostly either slow to mid-tempo Grizzly Bear appropriations or immensely pleasing and grooving electro-pop movements. On the one hand, they can be too serious for their abilities, the songs too stark and boring to find their way into your head after they’re over (“Chemtrails”); but the other side of G&V shows them as simply a really good pop band. When embracing this identity, they stand out in comparison to other similar-minded contemporaries (Yeasayer, for instance), because they consistently display great taste and intuition as players and singers. None of the five members ever overplay, and they allow space for the songs to settle into themselves, riding equally simple and wonderful rhythms to a song’s finish line (“Black Hills,” “Orange Blossom”). Gardens & Villa have real grace and power. When listening to this promising but uneven record, keep in mind that sometimes artists struggle to recognize their own strongest and weakest identities.