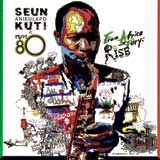 The youngest son of Fela seemingly carries the torch higher and brighter than his more famous brother, Femi. This is not an insult to Femi, who put out an excellent pair of albums on MCA and has a pretty satisfying album out now himself. Perhaps it’s not fair to compare when Seun has his dad’s band, Egypt 80, backing him, but if you find absurd the idea that Rise is a new classic worthy of being played next to Fela’s best work, go ahead and stop reading now. Egypt 80 (75 percent intact with original players) hasn’t lost any of their punch and angst over the decade-and-a-half since their leader’s passing, and Seun writes and sings from a similar well of political struggle. It’s a sad state, as many of Nigeria’s problems are either unchanged or more severe in 2011 than they were in 1971; alongside political despots there are now multi-national corporations like Shell and Halliburton. Like the best of Fela, however, this great music works just as well tuning out the politics as tuning in. Remember, you can still raise consciousness while you sweat on a dance floor.