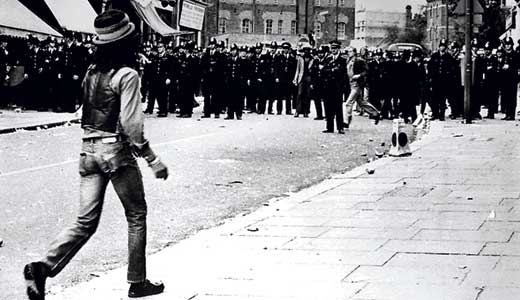 At first glance, the site of the new Dreamland Film Center would seem better suited for hiding fugitives than watching movies. Housed in a former homeless shelter a few steps off East Market, some of the theater’s back-alley confines include remnants of its S.R.O. past, active construction and windows coated with black paint. The location was part of a bundle of properties — some slated for demolition — that were put on the block when Wayside Christian Mission left the NuLu area. These buildings were later purchased and spared the wrecking ball by Gill Holland, a Louisville Film Society board member.

The atmosphere of this tucked away clubhouse for cinephiles — particularly in these early stages — could be described as primitive. But this is part of the thrill of watching films here. The 75-seat screening room is located in the former chapel of what was Wayside’s Emergency Family Shelter. Its pews remain, but cinema-studies texts and vintage, Super 8 instruction manuals have been swapped in for the hymnals once lining the seatbacks.

From the get-go, this “First Church of Cinema,” as LFS Director Ryan Daly calls it, has included the public in its growth, inviting visitors in during its amoebic stages and asking them to imagine the multiplex alternative that will blossom here. The quality of programming so far suggests better amenities will follow, and, in fact, key improvements have been put in place this summer. These include a proper lobby and entranceway, a cinema quality projector and custom-built screen, all purchased in August.

The LFS is looking to show off these additions, as well as drive up membership for further enhancements, with its presentation of Reel Soundz, a three-day, 20-film festival of music documentaries. New (and current) LFS members will receive free admission, and proceeds from the event will go toward building a concession stand (a liquor license was also recently obtained), commissioning retro, neon signage and designing a new projection booth.

Reel Soundz opens Thursday night with the seldom screened “Charlie is My Darling,” the first documentary produced on the Rolling Stones. It follows the band during a tour of Ireland in 1965, containing concert footage as well as rare interviews with Brian Jones. Jones was the founding Stones member who famously drowned in 1969, setting off the very rock ’n’ roll trend of dying at age 27.

There’s more Rolling Stones on Friday with the Maysles Brothers’ historic “Gimme Shelter.” Films featuring Johnny Cash, My Morning Jacket and Feist will run throughout the Labor Day weekend, along with a diverse slew of musical docs that range from religious Appalachian music to beatboxing to Krautrock.

Reel Soundz will close with a Saturday-into-Sunday midnight showing of “Rock ’n’ Roll High School,” the 1979 musical comedy that showcases “the hottest band this side of the Iron Curtain,” The Ramones. Tickets are $10 per film or free with LFS memberships, which will be offered at the door.