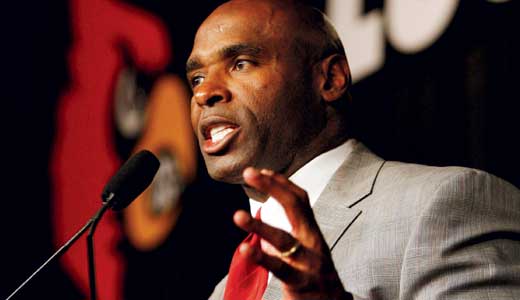 Charlie Strong won’t forget the bad report card. The day he was handed the grade results of his players from the semester preceding his arrival as the new football coach at the University of Louisville in 2010.

“I looked at it — oh, my God. We had 52 players below a 2.0 average. We had six players who didn’t pass a class. Six with a 0.0, and 52 below 2.0,” says Strong, addressing fans at the team’s kickoff luncheon in the Downtown Marriott Ballroom earlier this month.

The packed room is silent. Not a fork or knife clinks on a plate — all listening to a story about classroom failure, when most had expected to be hearing about the flight of fleet receivers and the August sweat of oak-sized linemen.

Strong continues with the tale. The next day, he says, he had his first meeting scheduled with his new team, and several players — anxious to show their enthusiasm, and having no notion the coach was seething inside — confided to Strong that in a few moments he would be receiving a standing ovation to begin the meeting. What they got in turn was a blistering.

“They heard what I had to say,” Strong says. “That’s when I challenged them. I told them that never again would that happen. Never again would we have a team grade-point average below 2.5.”

And the players soon found the new coach meant what he said.

“One day I’m on campus, checking to see if those six players who did not pass a class are going to class,” Strong says. “I slip into the back of a classroom at the beginning of class, and the professor noticed me. She says, ‘Oh, we have a special guest. Coach Strong, would you like to address the class?’ I said, ‘No, ma’am, I would not. I’m here for one reason. You see that guy up there in the gray sweats? Last semester he couldn’t find your classroom. I’m making sure he can now.’”

The crowd roared, and Strong cracked a smile, too, pointing a big tough-love hand toward senior defensive end Greg Scruggs, no longer a 0.0 man. “I will say this, Greg Scruggs: You will graduate this December. Yes, you will.”

Strong stays on message. At nearly every public rally and press conference, he harkens to the academic nadir and reports improvement. He says the team posted a collective 2.65 G.P.A. last fall, and came in at 2.7 this past spring, with 11 players on the dean’s list.

It’s not a rafter-rattling sermon. More of a steady drum beat. And a good message delivered against the deluge of rule-breaking scandals surrounding college football.

He gives it one beat of pause.

Life in the fast lane

It’s a typical hot afternoon in August, with a hundred or so Louisville football players scattered across acres of practice fields near Papa John’s Cardinal Stadium.

A year ago, on a similar August day, Louisville had looked, to this observer, a little small, which is not ideal in college football. But the 2010 team went 7-6, winning the last game of the season to qualify for a bowl, then taking the bowl game. A good season, all things considered.

A year later, Louisville might be just a little bit bigger. Perhaps more muscular. Still, you don’t see anybody out there who looks like Mean Joe Greene or Big Daddy Lipscomb.

But when they move, the Cardinals move quickly. If this team succeeds, it’ll be because it plays faster than its opponents.

Late in practice, the players are called to one field to run plays. The ball is snapped and quarterback Will Stein pitches to running back Victor Anderson, who, like a whip, cracks himself around left end, suddenly loose along the sideline.

The defense swings around, but Anderson is striding out, picking up every yard possible before finally being angled out of bounds — right at a knot of civilians, who scramble to get out of the way. As this sideliner steps aside, we feel a push of wind ahead of Anderson, and then a brush of air whooshing by in his wake. Kind of like a shock wave. The way a hurricane pushes high waves ahead of it. It’s a physics thing that has to do with velocity. And momentum. Which is what the Cardinals are trying to build.

“The game we play is about speed,” says junior offensive guard Alex Kupper. “You watch our defense, they fly around. Our offense, we’re based in the ‘speed set.’”

Running is just a component of playing at speed, according to Anderson.

“One of the things you can do is be ready to be fast,” Anderson says. “I think what the coaches are harping on is guys knowing the plays and going fast. Not being timid, not having to think what you’re going to do.

“When we’re breaking the huddle,” Anderson adds, “you immediately see how the defense is lining up. See where the blitzes can come from, and where your pick-ups are going to be. So when you hit the line of scrimmage, you’re ready to play at full speed. The game’s a lot faster when you can do that.”

A few plays later, Louisville’s other star running back, Jeremy Wright, gets loose down the other side of the field — and is gone. Just like that.

But Wright isn’t thinking about running speed either. He already knows how to run.

“What I’m working on is pass blocking,” says Wright, a sophomore. “And I’m trying to be a better pass receiver. That’s the best thing I can do to help the quarterback.”

Ah, the quarterback. Who will that be? Aren’t many choices. Just three on the team. Senior Will Stein likely will start, with blue chip freshman recruit Teddy Bridgewater brought along through the season. Louisville has a flock of fast pass catchers, but one wonders whether the quarterbacks have the arms to air the ball out down field — with accuracy. And touch. That’s always been a calling card of Louisville football.

But offensive coordinator Mike Sanford says he’s not looking for a golden arm. “What I want our quarterbacks to do is manage the game,” Sanford says. “I’m looking for them to take charge of the game in the huddle, get us in the right play, and execute it.”

Weighing in on the subject is linebacker Dexter Heyman, whose knowledge of Stein dates to their days staring across the line at each other in high school.

“Will’s a smart quarterback,” Heyman says, “and when I say smart I don’t mean just smart about reading coverages and checking plays off at the line of scrimmage. He just brings that winner’s mind set.

“Teddy?” Heyman continues. “It’s a big jump right off from high school to college football, but he’s really good at leaving the pocket and throwing on the run.”

And anything done on the run is part of the speed deal. Run, pass, intercept a pass — make something happen. Be explosive. “We’re an everything team,” Kupper says. “As an offense, you want to be able to do everything — to make yourself more lethal.”

The Cardinals’ other question mark stems from a lack of experienced cornerbacks — the defensive players who cover the opponent’s fastest receivers. Inexperience is often a recipe for disaster, but whoever is picked for the posts will proceed with Strong’s simple challenge. “You guys say you’re fast. Go cover them.”

Which is pretty much what he says for the entire team: “We’ve got some good players. Go play.”

Which projects, perhaps, to a season similar to last, with a thin line between winning and losing. A year ago, Strong inherited a team a little beat up by losing, but got his players to play for him. His challenge will be to get them to do it again. At speed.