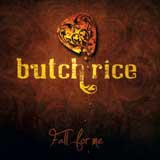 Overly nice people make the rest of the public paranoid. Times are hard, the economy sucks, the political system is beyond broken, and the world is simply not a happy place right now. So when someone pops up with a permanent smile and an incredibly positive disposition, it’s not believable if not indictable. Music is even more jaded. Listeners have become diabetic, allergic to sucrose. It’s a special talent that can melt away that shell. Butch Rice attempts just that with Fall For Me. The title track opens the album, and its mood echoes that of the rest of the record. If there’s a hint of melancholy, it’s the type that happens two steps past despair — a 7 a.m. skyline. Parts of the record are downright sleek, the forward propulsion of “Speak” undeniable. That you can easily hear several of these songs in film, particularly in the third act, gives as best a description possible. While I can’t say I’m fully enamored, my armor is just a bit softer than it was an hour ago.