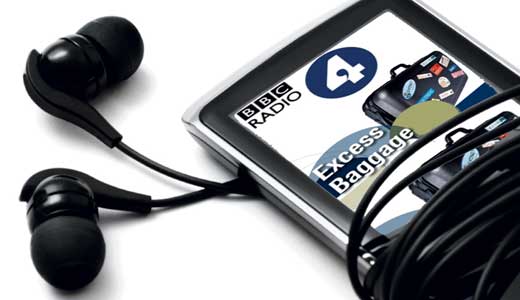 Have you ever wanted to slap Rick Steves upside the head? If you don’t know who Rick Steves is, or have him confused with Steve Jobs, then this column may not be for you.

But if you are familiar with Rick Steves, host of public radio’s “Travel With Rick Steves,” chances are you’ve wanted (only figuratively, of course) to swat him upside the head a time or two for sounding in his every utterance like the epitome of the NPR-listening dweeb who wears socks with Birkenstocks and orders the Driveway Moments CDs for all the people on his holiday gift list.

OK, OK, Steves is not as unbearable as all that. He kind of grows on you after a while, like dandelions in the garden. You realize there’s no sense in fightin’ ’em. His old-fashioned, Ward Cleaverish way of letting people yammer on about their wanderings through the cathedrals, mosques and temples of lands far and wide can actually be kind of endearing if, say, you’re stuck on the expressway and have listened to absolutely everything else on your iPod and the only other thing on the radio is Garrison Keillor. Also, surprisingly, Steves does not really look like he sounds. When I Googled him the first time, I was surprised to find that he resembles Harrison Ford, if Harrison Ford were capable of emotion and wore socks with sandals. This, in fact, may be how he gets women to explain to him such topics as how flirtation works cross-culturally.

But enough about Rick Steves. What I’m here to talk about is the opposite of Rick Steves. Her name is Sandi Toksvig, and her show, tongue-in-cheekily, is called “Excess Baggage.” In fact, there is nothing excess about it. No baggage. Toksvig is a hoot. She was schoolmates with that whole lot of Cambridge Footlighters, including Stephen Fry, Hugh Laurie, Emma Thompson and Kenneth Branagh. But on the radio, she sounds like someone a generation older. In fact, she sounds (and looks) like someone’s Aunt Mabel. OK, wait. She sounds like a cross between Hyacinth Bucket from “Keeping Up Appearances” if Hyacinth had Stephen Fry’s wit and speedy facility with language. On occasion, I have actually wondered if, in fact, she is Stephen Fry in drag.

The broadcast lasts only a half-hour, in contrast to Steves’ hour, but I promise you more is packed into that half-hour that actually makes you want to get up off your duff and go do something about it.

Sometimes the thing you want to get up and do is to read the book of one of her interviewees. (There are generally three per episode.) Sometimes it might be to get busy planning a bicycle trip to the Dalmatian Coast of Croatia. Other times, Toksvig’s delivery of a throwaway line makes you realize that she’s such a funny comedian, you’ve just got to go look up her other work. The good news: There are lots of little gems on YouTube, which is where I discovered that she’s buds with John Oliver of “The Daily Show.”

Each installment has a theme. For instance, Toksvig’s guests might be three former war correspondents who have traveled back to the territories they once reported on, describing the differences between the country in the midst of war and now, when it has become a compelling travel destination. Or the guests might be three people who have traveled to Antarctica at different points in their lives: a teenager, a middle-agester, and a retired geezer.

One recent episode had Toksvig chatting up two crusty retirees who had traveled repeatedly to track down their family history as colonialists. The way she said to the Malaysian traveler, “And there’s your mum, looking absolutely spanking, at age 83, in her tennis whites,” almost made me picture her literally spanking the old woman.

Most of these people, including Sandi T. herself, talk at warp speed, which is part of the reason so much more is packed into the half-hour. It gives your brain a much more heightened workout than other shows of its ilk.