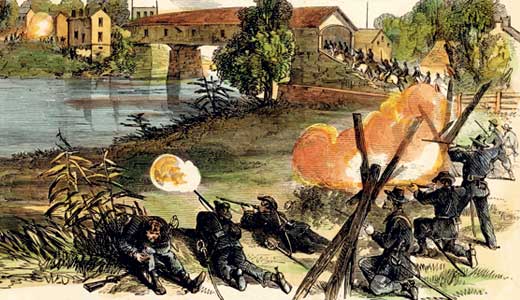 Painting of the The Second Battle of Cynthiana, Kentucky

What Stephanie Wilding Darst was looking for when she stepped into her time machine and turned the dial back 150 years was a fresh take on the story of Kentucky in the Civil War. Darst, the curator of Special Exhibitions and Projects at the Kentucky State Fair, knew about families divided by war in Kentucky — sending one brother off to fight with the Union, and another to fight for the South. “That’s a compelling story,” she says, “but it has already been told so well. I was looking for something new.”

What she found when she stepped into a state squeezed tight by a war between North and South were words — words drenched with beauty and emotion, marching along in the timbre of the times. Like those of a Kentucky slave who escaped to fight with the Union Army, writing in his diary that, “Coming forth from slavery is dungeons to the noonday sun.”

Back in the present, Darst poured the poetic words of a century and a half ago into the showcase exhibit of the 2011 Kentucky State Fair (Aug. 18-28), called “United We Stand, Divided We Fall: Kentucky and the Civil War + 150.” Collaborating with the fair for the exhibit are The Filson Historical Society and the Kentucky Historical Society.

Centerpiece of the exhibit, housed in South Wing B, is a large floor map of Kentucky in the war years of 1861-65. The map is bordered by photographs and images referenced to each of Kentucky’s 120 counties. Four special points of conflict are highlighted, including naval battles on the Mississippi River; the Union stronghold of Louisville; the forts and defenses of Northern Kentucky, designed to protect Cincinnati; and the back-and-forth fight for Cumberland Gap in the mountains of southeastern Kentucky.

Nearby, five standing story panels thematically guide fair-goers through the Civil War in Kentucky. Especially interesting among these is transportation, with the coming of the telegraph and railroads coinciding with the war — and helping Kentucky recover quickly after the war.

Darst invests many of the words and phrases she found into the lyrics of a 30-minute musical called “Kentucky’s Civil War Song: From Reveille to Tattoo,” staged four times a day. The word “Tattoo,” by the way, is a bugle call that over time became “Taps.” Darst liked the way musical calls ordered a soldier’s day, and even discovered a handbook called “Drummers and Fifers Guide,” which not only contains instruction on how to play the instruments, but advice for young musician recruits on how to fit into Army life.

The musical is composed by Tim Murner and directed by Clint Vaught, of Louisville’s Youth Performing Arts School, with a cast of five YPAS graduates. Darst imbues the concluding ballad with the sonorous lyrics “Swell the chorus of a nation” — drawn from a speech by Abraham Lincoln.

“Lincoln is just so amazing,” she says. “You can feel how his opinions and emotions grow straight out of his youth in Kentucky and frequent visits here. The man we claim as our own was so eloquent about slavery and the division of the country. His words just jump out at me — from the Gettysburg Address, the Emancipation Proclamation, the Second Inaugural Address. We can see how Lincoln bore the struggle.”

Kentucky’s motto, “United We Stand, Divided We Fall,” became a rallying call for many in the Civil War. Private citizens, for example, would emblazon the envelopes of their mail with the state seal.

“The phrase comes from a Revolutionary War song,” Darst says. “Kentucky’s first governor, Isaac Shelby (elected in 1792), liked the song, and the phrase was chosen for the state’s motto. Then when those words from the Revolution came around again in the Civil War — that’s the goose bumps for me.”