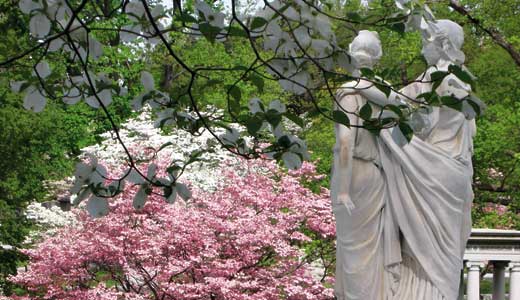 Douglas Keister spends a lot of time in cemeteries. He travels often and says he has visited “hundreds” of the eternal resting places during his lifetime.

Keister finds them fascinating for a number of reasons — he notes that they are places to study architecture, enjoy nature and get in touch with the past. There is plenty of history connected with cemeteries that goes beyond the monuments within them.

“Cemeteries, in general, were our first public parks,” Keister says. “After they were developed, cities said, ‘Wow, we should have something like this throughout the city — but maybe without the tombstones.’”

The author and cemetery expert will explore these topics and more during his presentation, “Stories in Stone: The Stories Behind the Monuments of Cave Hill Cemetery,” on Sunday at Episcopal Church of the Advent.

Keister has visited Cave Hill four times and says he enjoys the “Victorian garden” aspect of it. “The older cemeteries seem to either fall under the headline of ‘civic treasure’ or ‘civic nightmare,’” he says. “A lot of them were established in the mid-19th century. The plots were originally taken care of by the families, and nowadays families are so scattered that it doesn’t happen anymore. But Cave Hill is well supported by the cemetery itself and by the community.”

Keister’s presentation will include information from two of his more noted publications — “Forever Dixie” and “Stories in Stone: A Field Guide to Cemetery Symbolism and Iconography” — and will also cover cemeteries all over the world — from Europe to India. Following the lecture, attendees will go on a walking tour of Cave Hill with Keister and Clyde Crews, historian and archival coordinator for Bellarmine University.

To those who might say his interest in cemeteries and tombs is a bit morbid, he points to the more famous tombs around the world. The Taj Mahal is one such example. “A lot of people don’t realize it’s a tomb,” he says.

Sunday’s tour will offer attendees a look into the lives of Cave Hill’s residents and will feature information about the once-secret societies such as the Masons, Odd Fellows and Woodmen of the World, many of which are represented on the monuments within the cemetery.

“What differentiates (Cave Hill) from a lot of other Victorian-type cemeteries are the newer parts of it, and the sculptures,” Keister says. He also praises how active a cemetery it is. “It’s just incredible.”