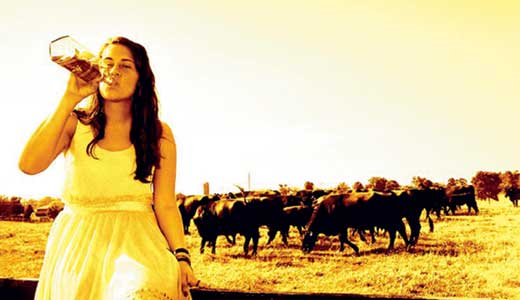 Lindsay Boling is one of the fastest rising comedians in Louisville. Her résumé is vast — she’s shared the stage with the likes of The Sklaar Brothers, Josh Wolf and Anthony Jeselnik. The University of Louisville graduate will be featured this weekend at Comedy Caravan with her old friend (and fellow Louisville native) Sarah Hyland. Boling met me at the biggest coffee shop in all of cyber space, Twitter, for LEO’s first ever “Twitterview.”

@lbols In 140 characters or less, tell me your life story. #FirstQuestion
@leoweekly Trying to wake up at 10am every day and type on computers after sleeping in my contacts (so my life’s been squinty).
@leoweekly Sorry, first answer was a still asleep tweet … but I stand by the squinty thing.

@lbols What made you wanna go on stage?
@leoweekly I like to do things that make me hate myself, and this seemed like another great opportunity for that.

@lbols You’re performing with Sarah Hyland at the Caravan, and I know you two are close — how did this duo emerge?
@leoweekly From unicorn magic.

@lbols If you and Sarah were in a WWE cage match, who would prevail? #NotAsPervertedOfAQuestionAsItSounds
@leoweekly I think I’ve got her on strength but she’d probably have rollerblades on, and I don’t stand a chance against those things.

@lbols When do you know you’ve gone too far on stage?
@leoweekly When you walk 4 people as an emcee 3 minutes into the show. #whoopsie
@leoweekly But everyone else stayed, so what does that tell you? They’re more polite? I don’t know.

@lbols If we were going out drinking after the show, what would we be drinking and why?
@leoweekly We’d go to some dark empty bar and drink jack daniels just like we were pirates … let’s do that tonight.

@lbols I’m down! Speaking of dark bars, you run a show every Monday at Gerstle’s Place … why should people come see it?
@leoweekly We run it as a workshop, and anybody can get feedback after their set … so you can see kind of the whole writing process.

@lbols Where is the best place to get drunk in the Highlands?
@leoweekly Oh man this is tough … I’m gonna say the tap room b/c I go there a lot (and I can walk home).

@lbols On that note … are you for or against Catholic guilt?
@leoweekly Against it because I have it … and I feel guilty about that.

@lbols If you could choose one person to write “Boling for Comedy,” a biography of Lindsay Boling, who would you choose?
@leoweekly Obviously you with that kind of a title! Let’s start it tonight while we’re pretending to be pirates.

@lbols What’s creepier … clowns, babies or ventriloquists?
@leoweekly Babies dressed like clowns being ventriloquists with their hands up other tiny little babies’ buttholes.

@lbols Start a hash tag that people can jump on when they finally read this article. #LastQuestion
@leoweekly Are baby buttholes gross or cute? Discuss. #babybuttholes