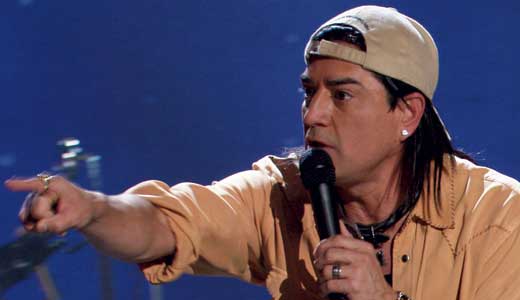 After two hour-long Comedy Central specials (“Red-Nexican” and “Hick-Spanic”); appearing in “Latin Kings of Comedy” beside heavyweights like Cheech Marin, Paul Rodriguez and George Lopez; as well as touring with old friend Ron White, Alex Reymundo has carved out a niche for himself in the world of stand-up comedy. The Mexican-born, Texas-raised Louisvillian sat down to talk with me over bison burgers at Butcher’s Best in Prospect. “I want Louisville to be proud of me,” Reymundo says of his adopted hometown. “I want Louisville to say, ‘He’s one of ours!’ I genuinely do.” He’ll be making us proud at The Improv this weekend.

LEO: When did you know you wanted to be a performer?
Alex Reymundo: My dad was always my hero until I realized Elvis got more chicks. When I realized that, I was a young kid and decided I wanted to be in show business of some kind.

LEO: What would be the best advice you could give an up-and-coming comedian?
AR: Get on every stage you can and record yourself in some capacity. I always tell comics, “What does Peyton Manning do?” He watches the tape. That’s what makes him the greatest quarterback in the NFL right now. So I tell comics to record yourself. Be original. And don’t suck.

LEO: Please define the word “Red-Nexican.”
AR: Alex Reymundo — I’m full-blooded Mexican. Born in Mexico, both parents are Mexican, that makes ya full-blooded. But I was raised in Fort Worth, Texas. I’m very much a Southern boy — I have Southern manners, I’m a gentleman. I have a Southern sensibility.

LEO: You’ve known Ron White for more than 20 years. What’s your best Ron White story?
AR: (When we started) we had two rules. … One guy can’t sleep while the other one is driving, and if someone hands you something to drink, snort or smoke, you gotta do it. And that’s the way we lived it — so when you ask the drunkest or whatever, there’s so many — they’re just a blur. I think the best Ron White story I have is that we’ve been living “The Ron White Story” for 23 years, and I suspect it will go on as long as his health and mine stand.

LEO: Is it hard to balance family life with being on the road?
AR: Not on me. (Laughs) I say it’s easy … I smile all the way through it. I have a wonderful wife, and it can be tough on her sometimes, but I have to believe for her, it has to be a relief those three days I’m gone a week.

LEO: You’re from Texas, your wife is from Kentucky, and now you live in Kentucky.
AR: I just love Kentucky girls. They’re beautiful, blonde, blue-eyed, and they don’t have to be blonde and blue-eyed, but I just fell in love with ’em. I have to say there’s something in the water here I liked and would recommend to any male adult in the country: Get yourself a Kentucky girl.

LEO: Being happily married for a long time — is love more of a Sting song, Bon Jovi song or Metallica song?
AR: Sting if the kids are around — then it’s all nice, love, candles. Bon Jovi because it makes you feel it. Me and my wife are creatures of the ’80s, so there aren’t many Bon Jovi songs that come on without me thinking of her. But Metallica … late at night … hell yeah!