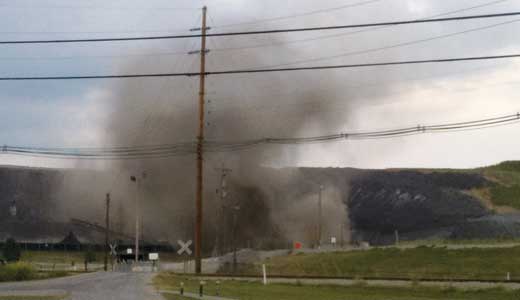 Pleasure Ridge Park residents Kathy Little and Greg Walker say they are used to ash clouds emanating from the LG&E processing plant not far from their homes off Cane Run Road. But on Friday night and throughout Saturday, it was worse than usual.

“On Friday evening, it spewed an ash-like substance, a constant spewing into the air. And it did that all day long on Saturday,” Little says. “Greg lives about 50 yards from this, he says, ‘Kathy, I think something’s gonna happen here.’”

What happened was a cloud of ash blanketed the neighborhood adjacent to LG&E’s sludge processing plant, which the company attributes to an equipment malfunction. The company’s director of communications and brand management, Chris Whalen, confirmed the incident Monday morning.

“We did have a malfunction Saturday night around 7 in our sludge processing plant, and we immediately shut down the plant and reported it to Air Pollution Control District,” Whelan said. “Any time you’ve got equipment, occasionally you will have a malfunction. This one has had malfunctions in the past, and anytime we have a malfunction, we report it as we need to, or as we’re supposed to.”

On Saturday evening, Walker was in his backyard grilling when he noticed the thick ash cloud increasing in size.

“I looked around the corner of the house, and I saw (the ash) blowing up … It just kept getting worse and worse,” he says. “Then I looked back over the neighborhood, and down where the trailer park is, it was just a black haze over top of the whole neighborhood.”

Although Walker took numerous photographs showing a black cloud rising from the plant Saturday evening, Whelan would not confirm whether coal ash actually left the site.

“From the photos I’ve seen, it appears that it may have. But I don’t know that for certain,” Whelan said. “Like I said, we have reported it in the event that it might have.”

“I can say at this point that we’re investigating that and we’re going to meet with the company, if not today, then in the next couple of days to talk about this and also the notice of violation that we sent to them last week regarding the samples that were taken off of houses,” Stull says.

The samples he is referring to were taken as part of a study completed in mid-July that found significant levels of coal ash on homes in this very neighborhood.

Whelan acknowledged that Saturday’s incident could further strain LG&E’s relations with neighbors: “I’m sure that our image has been damaged. And for that I’m sorry for them, and like I said, we have met with our neighbors recently, we met with some folks we had done some sampling on their homes, and we do understand their concerns. And we’re evaluating all sorts of options with them, so I can sympathize with their concerns.”

But the aforementioned meeting did little to placate residents living near the plant.

“They had their scientist there, and he was there to confuse us. And he tried to mitigate the fact that there were really bad ash samples that came back,” Little says. “And then you get this. And it’s just frustrating. And it’s scary. And it’s confusing.”

To make matters worse, LG&E’s account of what transpired at the plant last weekend varies significantly from that of nearby residents.

APCD confirms that while neighbors began submitting complaints about dust blowing over from the plant on Friday night, LG&E did not report a problem until Saturday. LG&E maintains there was nothing wrong with the plant on Friday.

And though Whelan initially stated the equipment in question has malfunctioned in the past, she later insisted such incidents are rare. “This is the first time in 10 years — the first two times (there was an incident July 18 as well) — that we’ve had this incident at this sludge processing plant. And we have shut that down until further notice, and we have a task force looking at what’s going wrong with it.”

In that same follow-up interview with LEO, Whelan retracted her previous statement that the incident occurred at 7 p.m. Saturday, instead saying it happened at about 8:10 p.m., as LG&E shut down the plant right afterward at 8:15.

This conflicts with the accounts of neighbors, including Walker, who says he started taking photographs of the ash cloud around 7:30 p.m.

“They knew that there was a situation on Friday,” Little adds. “The fly ash was spewing on Saturday. They continued to run the machine, even though it was malfunctioning, which caused the huge cloud.”

When told that LG&E claims there have only been two malfunctions at the plant over the past decade, both Little and Walker let out a derisive laugh.

“Uh, no,” Walker says. “Usually about every weekend they turn out stuff. When I showed the plant manager a picture (of ash spewing from the plant) a while back, he goes ‘Oh, that’s just an isolated incident.’ I said, ‘No it ain’t, it’s every weekend. When there ain’t nobody around you all are turning that stuff out.’”

Both Little and Walker claim that since the company has faced scrutiny in the media over the past month, they’ve started running the equipment overnight, making photographs more difficult.

“There have probably been more incidents that haven’t been reported because we weren’t home, or they were in the middle of the night. You know, because they do tend to release all kinds of stuff in the middle of the night when you can’t really take photographs real easily,” Little says. “Now we’ve just started getting smart, as far as trying to somehow or another (photograph) it in the moment.

When asked whether LG&E is concerned for the safety of the people living next to the plant, Whalen said they have yet to find anything harmful.

“I mean, we’re always concerned about our neighbors, we’ve been doing testing in the area, and we’ve not found anything that’s harmful. We have found fly ash in the area, and we’re continuing to do testing to ensure that we figure out what the issue is.”

Little and Walker are pleased to hear the plant is closed for now, but they are not overly optimistic.

“I think it’s good news, because they’re not fixing anything over there,” Walker says. “They’re trying to cover it up. Like that meeting they had over there with us, that was more of a dog and pony show than anything.

“They’re not going to stop unless they get a different plant manager in there, or they shut the plant down. The manager kept saying they’re within EPA standards. I’d like to know how that stuff’s getting all over my house if they’re in the standards. I don’t think the EPA would agree with the pictures I’ve got either.”