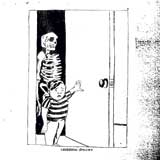 It’s still the 1980s … or at least punk band Cerebral Ballzy thinks it is on their debut self-titled album. Their style of hardcore sounds eerily close to the initial wave of hardcore that dominated the West Coast. Fitting for a band of skaters, Cerebral Ballzy write short, fast songs about skating, being a punk and relationships that we’ve all heard before. With a run time of just more than 20 minutes, this album should fly by but doesn’t, largely due to the lack of urgency and emotion that, in lieu of musical prowess, gives many a punk the key to their best material. Every track is competent, but after decades of bands aping this style, simply playing competently doesn’t cut it. This is where the vocals, courtesy of lead singer Honor Titus, should come in, bringing their music to a higher level of intensity. His vocals are largely yelled but lack intensity or emotion for the majority of the album. Not a bad listen, but only worth the time of skate-punk devotees.