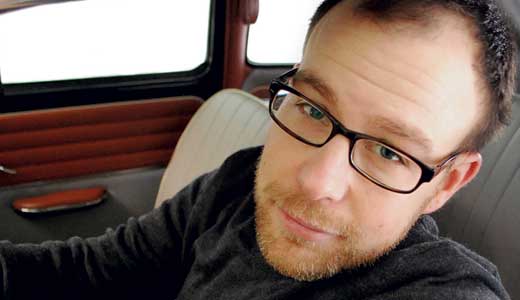 Being a single parent is hard enough without having to deal with leaking oil, flat tires and faulty transmissions. Christopher Boucher’s debut novel, “How to Keep Your Volkswagen Alive,” examines these and other challenges of parenting a 1971 Volkswagen Beetle. Boucher is in the middle of a cross-country road trip/book tour promoting his novel. He makes a pit stop in Louisville on Thursday. LEO chatted with him about his whimsical book, the writing process and bluegrass.

LEO: You spent 10 years writing “How to Keep Your Volkswagen Alive.” How did the story start?
Christopher Boucher: It began with the title and a talking Volkswagen, both of which appeared in vignettes I was writing during my second year in the MFA program at Syracuse University. As strange as it sounds, though, I didn’t really find the plot of the book until about three years into the project when my father had a heart attack. He survived, thankfully, but that event changed my outlook on the world. In the months afterwards, as he recovered, I began writing a story in which a character is attacked by something called a “Heart Attack Tree.” That story turned out to be the first chapter of the novel.

LEO: How would you describe the book?
CB: My novel tells the story of a young man living in western Massachusetts, recovering from the loss of his father and trying to raise his son, a 1971 Volkswagen Beetle. The book was inspired by John Muir’s 1969 manual of the same title, and it includes narrative vignettes and excerpts from a manual about this very strange car — a car that drinks chai and runs on stories.

LEO: You said in an interview with Joel Edelstein that writing this book “signaled a different process” for you. How so?
CB: When I began this book, I was excited by the prospect of writing with a focus on sound and by surreal premises such as the ones in these stories. The prospect of revising this book, then, was a honing of this new approach — trying to decide which of these inventive premises or strange words were necessary and which were extraneous.

LEO: Did you play “punch buggy” as a child? What do you think VW would think of the game?
CB: What a great question! I think the Volkswagen would find the game insulting and not very funny.

LEO: Tell me about the tour so far. The Bug you were planning on using broke down in California — what are you touring in now?
CB: We’re touring in a rental car — a Jeep, actually. It’s not very Volkswagen-like, unfortunately, but it does have air conditioning.

LEO: You and your wife are both musicians — in fact, you met playing bluegrass together. What’s on your road-trip playlist?
CB: Since we’d planned to make this trip in a ’72 Beetle, we devised a playlist consisting of songs from that era — Neil Young, Crosby, Stills & Nash, Paul Simon, Joni Mitchell. We’re still listening to some of that music, though we’re also listening to a fair amount of contemporary music — Bon Iver and Cake, for example.

LEO: What advice would you give to young writers and other first-time novelists like yourself?
CB: In my writing classes, I spend a lot of time emphasizing the writing practice itself — I encourage students to make time to write every day if possible, even if it’s only for a few minutes. Jayne Anne Phillips, who I studied with as an undergraduate, used to say that if you miss one writing day, you actually miss two, because it takes that second day to catch up. My advice would be to create a time and space for your work, and do all that you can to protect that space.