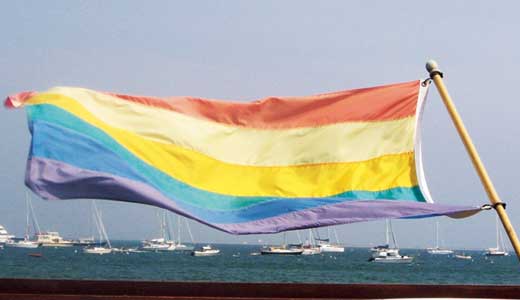 I am having a blast in Provincetown … wish you were here! I didn’t realize this, but Provincetown is not Providence … they are actually in two different states! We flew into Rhode Island and had to drive to Massachusetts, which I just had to look up to spell. The Rhode Island airport was actually bigger than the state — at least it felt that way when we walked to pick up our rental car.

Anyway, we finally rolled into P-Town, and our hotel was right on the beach. Holler! The water was a little chilly, and I found out that’s where “Jaws” was filmed, so I only dipped my toes in from time to time. I feel like all we’re doing is eating … and when we’re not eating, we’re drinking or shopping until we eat again. It’s the perfect vacation! My travel buddy Laura has eaten her weight in seafood, I swear. Thanks to you and that time when you forced me to eat fish sticks or else I couldn’t leave the table, I now have an aversion to all forms of seafood — so the fresh lobster, clams, oysters, fish and other nasty slimy crap was lost on me. I found some amazing soft serve ice cream, though!

You’ll never believe what we found among all the lobster roll palaces — an El Mundo, right in the heart of P-Town! I hung out there every day with fellow Louisvillians Bea and Shelby, who just opened this sister location in the spring. Don’t worry, they’ll be back in town in the late fall. This El Mundo is huge! And although they had some weird things on the menu — lobster queso? — their food was as yummy as ever. It was similar to the Louisville spot, but it wasn’t cramped, didn’t have a half-hour wait and they make their own chips. Shelby whipped me up a Mosquito shot, which had tequila mixed with chiles, lime juice, agave nectar and cilantro. Instead of the tequila just burning my throat, it burned all around. Awesome!

Anyway, you would love the colors in this city. Rainbows are everywhere! It was “Girl Splash” weekend, so I saw lots of ladies holding hands with other ladies … in the open! I felt like I was on a TV show on the LOGO channel. There were street performers on bikes, naked singing men and drag queens who hosted karaoke. I went whale watching one day — the kind that didn’t involve my mirror. LOL … jk … but I did go out on a boat and saw about 20 humpbacks frolicking in the Atlantic. Those things are huge! That’s what she said … haha, sorry … but they were like airplanes under the water.

Anyway, I might not come home. I think I could make it out here cracking lobsters or hustling bourbon on the Dick Dock.