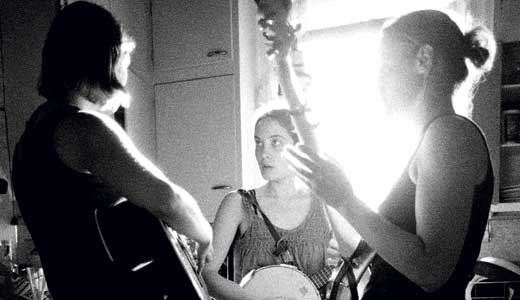 Julia Purcell didn’t plan to make a record of lullabies to sell. While pregnant, Purcell thought it would be fun to make one for her now 10-month-old, Maya. Her bandmates, Cheyenne Mize and Joan Shelley, liked her idea.

“Maybe that took the edge off,” she says. “That allowed us to create something really organic and beautiful. We spent a couple of short afternoons in Cheyenne’s attic recording around one microphone, and the results, we really loved.”

“I never saw myself as doing music full-time, as a performer. I’m just really thankful that I’m able to hold onto a part of me that can do that for myself, to be a whole person. I don’t feel like I’ve missed out; a solo career was never really a dream of mine. What I’m doing with these ladies is perfect.”

Between the business, the baby and the new album, she has plenty going on. Maya made her voice heard during our interview. “This is harder than any job I’ve had,” Purcell laughs. “I’m on duty all the time.”

The trio is promoting this short but sweet record of traditionals with performances at Uncle Slayton’s (Aug. 5) and ear X-tacy (Aug. 9).

“We thought there was a market for it — everyone’s having babies or knows someone who’s having babies. It’s not just for babies, it’s an album for everybody.”