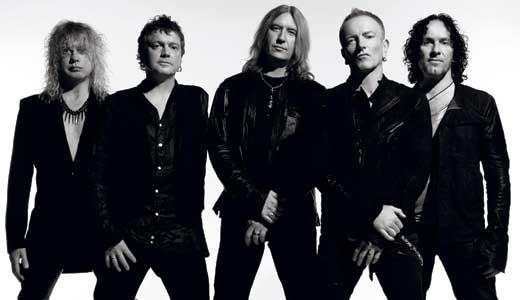 Phil Collen, 53, joined Def Leppard as a guitarist in 1982 after a successful run with the glam band Girl. LEO caught up with him via phone from a Starbucks.

LEO: The last time you were in Louisville, a friend of mine was surprised to see you guys in a Starbucks, ordering decaf lattes. How do you balance being a rock star vs. being a regular guy in real life?
PC: Easy, actually. I’ve always led a very normal life. The only time anything’s ever really happened was years ago, in the ’80s at a Bon Jovi concert in Japan; I got mobbed by a gang of girls, and someone tried to tear a hair out.

LEO: Five songs with “rock” in the title (“Rock! Rock! (Till You Drop),” “Rocket,” “Rock On,” “Rock of Ages,” “Let’s Get Rocked”) appear on your new live album. Are you aware that 20 percent of your set involves “rock” in some way?
PC: I think that’s probably the lack of imagination of a teenage boy. When these songs were written, that’s what you’re dealing with. It’s one of those things — be careful what you wish for. You want to be a rock star, then you go, “Shit, we’ve got all these songs, ‘Rock’ this, ‘Rock’ that” … But to be quite honest, they are rockin’ songs; they kind of work in that way. I do think that’s what happens with younger guys — before you travel and get a different view of the world.

LEO: Do you have any favorite young bands today?
PC: Erykah Badu — she is an artist, she gets her shit out, what she wants to get out there. There’s some great stuff out there, but you have to dig in and reach for it.

Def Leppard plays Friday at the Kentucky State Fair. Read more, plus an interview with openers Heart, at bluecat.leoweekly.com.