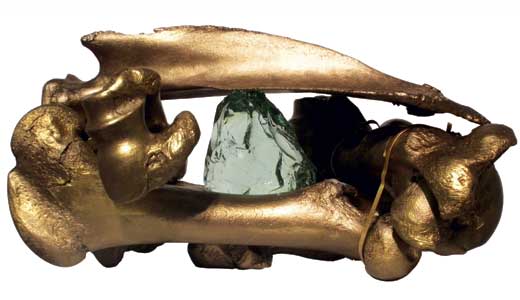 Pablo Picasso, Claude Monet, Michelangelo — artists from very different times, with vastly diverse styles and subjects. But the one thing they have in common? All three continued to produce art well into their 80s.

The JCC Patio Gallery’s latest exhibition showcases lesser-known but similarly prolific artists. All 19 works in the show were produced by artists who are at least 80 years old, a demographic that gallery director Bette Levy finds particularly exciting. “It’s thrilling to know that there are so many creative individuals in our community who are producing wonderful art despite their age,” she says. “The artistic force is both powerful and essential in the lives of these individuals and a potent tonic to the viewers of their work.”

It’s been a show a long time in the making. Levy and fellow juror Aline Barker came up with the concept during the annual Mazin Exhibition last December.

From delicate watercolors to gilded cow bones, the pieces in “Art After Eighty” are as varied as the artists themselves. “Apart from their age, the artists reflect considerable diversity in terms of their training, style, medium, professionalism,” Levy says.

A stable nestled in rain-drenched woods; an O’Keefe-esque flower blossoming in turquoise, lilac and scarlet; a circle of delicate gossamer painstakingly embroidered with a whirlpool of tiny stitches — Levy has certainly achieved her goal of “a broad range of works.”

For Levy, the stories behind these pieces are just as important as the works of art themselves. One of her favorites is “What a Man,” Naomi Pressma’s portrait of her late husband, Boris Pressma. Levy deliberately placed the portrait by the entrance to the exhibit so that Boris, an active member of the Louisville arts community and the JCC, overlooks the gallery.

Another piece with a rich personal history is Elmer Lucille Allen’s “Shibori Wall Hanging Five Diamonds.” Levy describes Allen as a fascinating individual — in addition to being a talented textile artist, Allen was the first African-American female chemist ever hired by Brown-Forman. At 80, Allen is also the youngest artist in the show. In fact, Levy was so determined to include her in the exhibit that she postponed the date of the show until after Allen’s 80th birthday so she could participate.

Ewing Fahey contributed one of the exhibit’s most intriguing pieces, “Ancient Reliquary.” The gilded cattle bones that make up the bulk of the piece come from a waste pit at a local nunnery. Fahey and other members of ENID, a Louisville-based collective of female sculptors, took the discarded bones and transformed them into works of art. Fahey’s piece uses the bones to construct a gold altar that frames a hunk of sea-green glass, glistening with the hint of some hidden power.

A wide-ranging mix of media, all hinting at rich, ongoing personal narratives, “Art After 80” is a fascinating exhibit that celebrates this unsung demographic. Levy says the opening reception, held July 31, was one of the most well-attended and moving the Patio Gallery has ever seen. Former students and up to four generations of the artists’ families came to celebrate their determination and continuing passion for art.

After announcing the exhibit’s 19 participating artists, Levy received dozens of emails recommending other local artists in this age group. She and JCC Artistic Director Andrea Melendez are already talking about a second exhibit, perhaps even splitting the exhibit into 80s and 90s to accommodate the large number of qualifying artists.

For now, Levy says this inaugural show was “an absolute joy and a touching experience.”