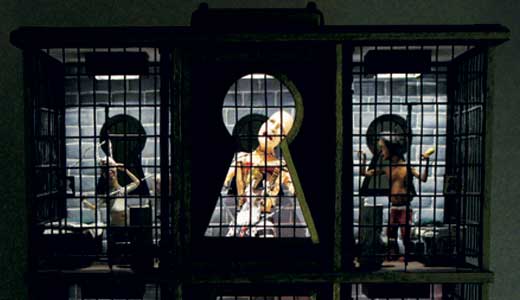 It seems pretty much everyone — from the artists, to the organizers, to the commissioner of the Kentucky Department of Corrections — is hyped about the “Bars to Walls: Inmate Art Expressions” exhibit at the University of Louisville. The show features more than 40 recent works by inmates housed in Kentucky’s state-run correctional facilities ranging from carpentry to sculpture to cross-stitch.

Exhibit organizer Kathy Salomon covered many miles in her station wagon crossing the state to pick up the artwork. Explaining how the idea for the show happened, Salomon modestly makes it seem as if it was a no-brainer, but it seems to be the kind of thing only obvious to someone studying for a combined doctorate in justice administration and fine art. Initially, the idea was just a hypothetical proposal for a museum methods class, but it was so well received both by her professors and fellow students, it seemed necessary to bring it to fruition. With the assistance of John Begley from U of L’s Fine Art Department and her many connections in the corrections community, she put out a call to inmates in Kentucky’s public prisons and received an impressive number of submissions. “I wanted to show the public what I know is happening inside our correctional facilities — people being productive and making creative contributions despite their limitations,” Salomon says.

Despite the inherent limitations of supplies, time, space and privacy, inmates find ways to use art to both express themselves and as a recreational pastime. The creative use of materials is a hallmark of these often self-taught artists, many of whom did not begin making art until they were incarcerated. Stacy Partin uses an elaborate process for making sculpting clay from crushed Ivory soap, coloring those creations with pigment lifted from M&M’s shells. “I used wood and hardened tissue paper in this sculpture as well,” he says in his artist statement. “I’d use floor wax for shine before I discovered better stuff.”

Using approved plastic needles, Gary Fulkerson creates elaborate knitted and crocheted articles. Fulkerson, who has been working in the medium for 12 years, writes: “I started just to make a little extra cash, but eventually became obsessed with it. I think and feel that it is very therapeutic.”

Many of the artists enjoy notoriety for their work by fellow inmates and administrators, as well as additional income generated from sales of their work. Some of the enterprising inmates have business cards welcoming commissions, and many regularly contribute their work to charity. All of the works in “Bars to Walls” will be for sale, with proceeds from some of the works earmarked for charity, while others go directly to the inmates. Although unable to attend the exhibit themselves, the artists will have the opportunity to see a recorded video of the opening.

Works that move beyond the realm of recreation and into the expressive are personal and sometimes painful to examine. Athena Williams contributed two pieces in the exhibition — two highly personal allegorical drawings she titles “Persephone’s Choice” and “Sorrow,” in which she uses classical forms to express her struggle to find meaning and redemption in her incarceration. A diptych about cause and effect, they show a woman in anguish, surrounded by flames, presented with the age-old symbol of the apple, representing a fateful choice. “For me, these are very personal pieces that express my life, a life I’ve spent paying for a bad choice,” she says.

The elaborate and expressive sculptures of Marvin Francis, made from paint, glue and toilet paper, depict scenes of incarcerated prisoners in often graphic, comical and grotesque scenarios. “Cellblock Prison Blues: Outside Looking In” is an unusually large work by Francis that functions like a jailhouse dollhouse, showing the activities of various inmates inside their cells, with a keyhole view into their realities. As the viewer peeks through the hole, it becomes obvious that we can only see a fraction of what the inmates are up to — a perspective that makes obvious the obscured vision many of us have of everyday existence inside penal institutions. Kentucky Corrections Commissioner LaDonna Thompson echoes Francis’ sentiment: “The exhibit will provide a unique opportunity for the inmates to showcase their work and receive positive feedback for talents they possess that are otherwise hidden inside the prison walls.”