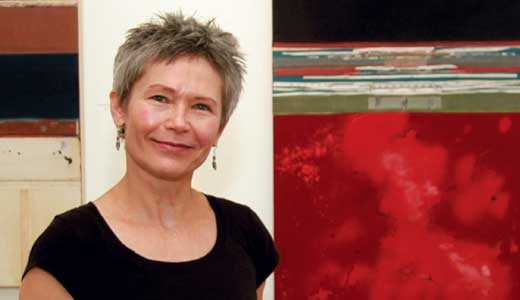 Showing off her home studio, Teri Dryden talks about how her art has evolved since moving to Louisville in late 2010. When she lived in Los Angeles, her art was primarily monochromatic. Since settling into the Highlands, it’s taken on more color, most noticeably red. Splashes and blocks of red color her newest works, such as a piece titled “Totem Diaries.” Made up of three long vertical pieces, the blocks are covered in bold, horizontal stripes — bringing to mind the image of a totem pole, which inspired the name.

This isn’t to say color was previously absent in Dryden’s life. Before becoming a professional artist, Dryden majored in theater and, upon the encouragement of a professor, auditioned for clown school at age 19 — she was not only accepted, but also offered a contract with the Ringling Brothers Barnum and Bailey Circus. Always drawn to slapstick comedy, she accepted. “So instead of going back to college, I ran away and joined the circus,” she says.

Two years later, Dryden left the traveling act. “I was living in a circus train, so I was tired of the cockroaches. And I just wanted to be in one place.” That place was Los Angeles, where Dryden spent the next 30 years. She started her time there as an actress, working mainly in theater. When her first son was born, Dryden decided acting was no longer for her. Inspired by her quilter grandmothers, she enrolled in a quilting class and thought taking an art class would improve her quilting skills.

“I never picked up a needle again,” she says. Her work, self-described as “mixed-media collage,” taps into a tenet of the eco-friendly wave sweeping the nation: repurposing. Dryden uses dilapidated books (“the older, the better,” she says) for her art, lending it an elegantly frayed aesthetic. “I feel like I’m sort of creating new beauty out of something that somebody doesn’t want anymore, and kind of giving it a new voice.”

While Dryden says Los Angeles hosts more exhibition opportunities for aspiring artists, Louisville has a thriving art scene. “I have found this art community to be equally amazing,” she says. “The talent here is equal to, if not better than, a lot of the work I’ve seen in California.”

When asked about her future, Dryden smiles: “I’ll keep working as long as I can stand. It’s all about the process to me, and if no one wants to see it ever again, I’ll probably keep doing it.” —Brandi Terry