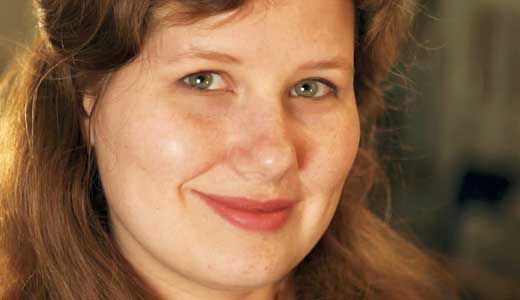 Some neighbors foist armloads of surplus garden zucchini upon their friends in these late, bountiful days of summer. Heather Fleming’s friends try to give her hair. Fleming is the resident wig master at Actors Theatre of Louisville, and her handmade designs appear in nearly all of the theater’s productions. Though Fleming prefers to work with human hair, citing its versatility and authentic look and feel as superior to synthetics, she has her sources, thank you.

“I think everybody secretly hopes I’ll say that I take (hair) from school children or do something unsavory to get it, but the truth is, I order it from a supplier,” Fleming says with a laugh.

Before she orders materials (by the quarter-pound, coded for color), Fleming hits the books, browsing art and reading literature from a play’s time period and place to understand the fashions and customs that apply to her characters. “All of ‘A Christmas Story’ is researched from LIFE magazine. I use a lot of the ads, which were designed to appeal to those (middle-class) characters. That’s who LIFE magazine was made for, whereas if I were doing ‘Blithe Spirit,’ I would look at Hollywood glamour from that period, because it’s totally different,” she says.

Fleming began designing wigs in graduate school at the University of Illinois, where she found herself running the university theater’s wig department during her second year. She then enjoyed a four-season run at Virginia’s Barter Theater before moving to Actors Theatre, where she has wigged since 2008.

“(Wig design) is a fusion of designing — in terms of figuring out who a character is and what an actor needs to be that character — and being an artisan,” she says.

Fleming also designs makeup and facial hairpieces, and her wall of mustaches and beards includes those used in last season’s “The Kite Runner.” She worked with the production’s cultural consultant on the unique challenges of creating beards for the Afghan characters. “It’s a very specific thing; you want to do it right, and you don’t want anyone to think you’re making stereotypes.”