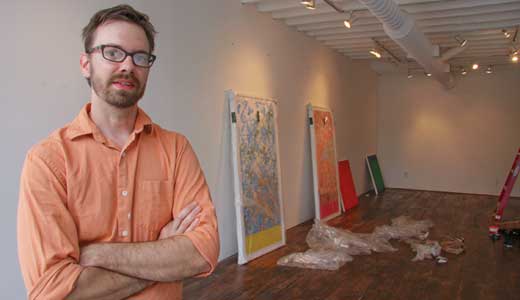 Ten years old is pretty young to know what you want to do with your life. Most of us were still stuck in the astronaut or princess stage. But that’s when Daniel Pfalzgraf of LoCAL.gallery had his first career light-bulb moment.

“My first thought of it was probably when I was around 10-12 years old,” he says. “I remember being out with one of my older sisters, and she was filling out some kind of job application. It said something about ‘What do you want to do for a career later in life?’ and she put down ‘own a gallery.’ That’s the first time I realized there actually are people who own galleries. I was already well into art, that was my big thing, so I just kind of had that seed planted in the back of my head.”

The curator/artist/art consultant has achieved that goal. The long-brewing idea that became the Louisville Contemporary Art Lounge (LoCAL) materialized in 2010 when he was asked to organize an exhibition. Previously, he got a BFA at Murray State University, then worked in Atlanta’s Lowe Gallery for five years. Upon his move to Louisville, he spent some time at the Speed Art Museum and is currently at the B. Deemer Gallery.

What’s with the name? “My original thought process was that I wanted to have a commercial art venue where I could make money to stay open without having to sell artwork. My way of thinking around that was to make it a lounge atmosphere, to sell drinks to pay the bills. Not have a bar that had art but more of a gallery that had drinks.”

At this point, LoCAL.gallery consists of a concept and Pfalzgraf’s talent. He hopes to have a brick-and-mortar gallery in about three years.

His next endeavor is “LoCAL.interviews,” which will be held during the NuLu Festival in September. “I’ve noticed that when people come into galleries, they go, ‘Oh, that’s nice,’ but if you start talking to them about the artist, they get into it. The physical art is only half of it, and the stories behind the art is the other half. Have a little booth, a table, couple chairs and have people talk with an artist.” —Jo Anne Triplett