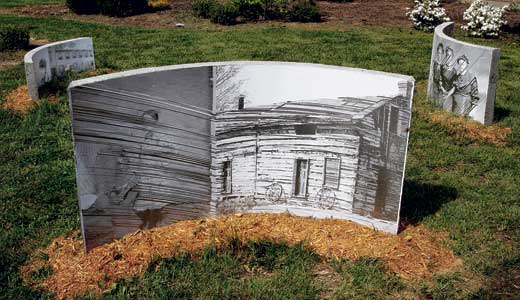 Up on a ladder, Mike Slaski worked to shore up a series of sticks suspended vertically along a horizontal web of strings. The long, thin pieces, sumac and red marsh, hang inside the open-walled structure at the New Albany Farmers Market. They’re meant to sway and ruffle and generally blend in with the comings and goings at the market.

But the wind has taken a toll, and Slaski, who lives in Cassopolis, Mich., has made the 340-mile drive to New Albany to see what he can do.

Such are the risks of making art for the great outdoors.

The sticks — an art installation titled “Nature’s Calligraphy” — are part of the New Albany Public Art Project, a novel partnership between the Carnegie Center for Art and History and the city’s Urban Enterprise Association meant to honor the old river town’s 200th anniversary in 2013.

Eight pieces have gone up in downtown New Albany since 2010, each referencing a choice bit of city history along two broad themes — “The River” (2010) and “Industry and Agriculture” (2011). Additional artwork based on other themes will be commissioned in each of the next two years.

The project seems to be a hit with the public — 400 people turned out for an art walk last month. And though economic impact is hard to measure, a survey of those attendees suggests that many visitors who came to look at the art spent money at downtown establishments.

Five pieces were commissioned last year, each with a $2,500 stipend. Based on feedback, the partners opted to fund fewer projects this year and increase the stipend to $5,000, says the Carnegie’s Karen Gillenwater, who curates the public art project.

Even so, two of three 2011 projects exceeded that figure substantially. Dominic Guarnaschelli’s “Resartus,” a 12-foot aluminum sculpture that references the historic role of women in the city’s textile industry, came in at $18,000, while Scott Scarboro’s “Time Ghosts,” which broadcasts archival newspaper and radio stories via a low-wattage FM transmitter, cost $12,000. Both artists received substantial in-kind donations.

Artists, of course, must constantly weigh projects and decide whether the investment of time and money is worthwhile. For installation artist Leticia Bajuyo, who created an homage to New Albany breweries with her 2010 piece “Brew History: All Bottled Up,” this one was a no-brainer, in part because of her respect for Gillenwater and Julie Schweitzer of the Arts Council of Southern Indiana.

“I’ve worked with them on previous projects, and I like to be part of whatever they’re involved in,” says Bajuyo, an associate professor of art at Hanover University. A native of Metropolis, Ill., a tiny town also located on the Ohio River, she enjoyed the blend of art and community education.

Bajuyo’s piece, located outside Bank Street Brewhouse, is a large Plexiglas case with a corrugated steel roof that references the Brewhouse’s roofline. Inside are recycled beer bottles with labels referencing myriad breweries from the city’s past, many operated by German-Americans. Taverns figure prominently into city history as well; they were a stopping place for travelers crossing the Ohio River on their way west or farther north, and provided a gathering place for sharing political ideas and socializing.

Bajuyo’s commission paid other dividends. The piece will be featured in a book on art made with recycled glass. It also counts as scholarship, and she was asked to co-curate the Carnegie exhibit “ENID: Generations of Women Sculptors.”

Scarboro, who lives in New Albany, wanted to apply for one of the 2010 commissions but could not make the timing work. “Time Ghosts,” which broadcasts old news stories within a small radius near the News and Tribune’s office, taps his longstanding subversive side. Once upon a time, using a Mr. Microphone and his car’s tape deck, he hacked a local radio station and broadcast answering machine messages and other weird sound bits in a 25-foot radius around his car — momentarily taking over the radios of cars stopped at traffic lights. Suddenly, people listening to an important ballgame were instead graced with the voice of Scarboro’s mother asking him to stop by and mow her lawn.

His New Albany project isn’t as wise-assed, but he does relish its ephemeral nature and how the signals are accessible to those who have the proper equipment. “I’ve always found radio transmissions intriguing — all these waves of sound floating around us unseen,” he says. “As a child, I had an old radio in my room … The noises were hauntingly beautiful.”

The Public Art Project received $25,000 each from the Carnegie and the UEA, another $40,000 from sponsors including the Horseshoe Foundation of Floyd County, and about $17,000 worth of in-kind donations.

All of the 2010 pieces will be de-installed by the end of the year (Bajuyo’s will be taken down during a public celebration on Oct. 28), while the 2011 pieces will be up for two years. Next year’s proposals are due by Jan. 3, with the work to be installed next May.

And former NPR host Bob Edwards, whose first radio job was in New Albany and whose voice is featured in “Time Ghosts,” will be in New Albany at the Carnegie Center for Art and History on Sept. 24 at 6 p.m. for a reading and book signing.

Time Ghosts, Scott Scarboro (constructed radio transmitter kits, batteries, solar panels and other hardware). Low-wattage FM towers transmit audio programs that tell stories from the city’s past — some mundane and some stupendous. Based on newspaper and radio archives and including recordings from former NPR host Bob Edwards, whose first radio job was in New Albany. Located in front of The News and Tribune at the intersection of Scribner Drive and Market Street.

Brew History: All Bottled Up, Leticia Bajuyo (steel, Plexiglas, wood and lights). “Beer chronicle” that references the city’s history of taverns and breweries dating to 1840; primary material is locally collected, used beer bottles. Located at Bank Street Brewhouse, 415 Bank St. (Will be de-installed during a public ceremony on Oct. 28, 6-8 p.m., with the public invited to take home bottles as souvenirs.)