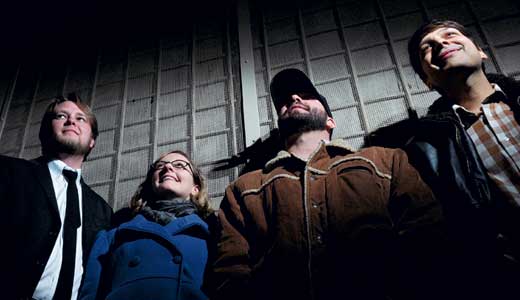 Amy Attaway always said she didn’t want to start a theater company. The Louisville theater scene afforded her ample opportunities to direct, and she enjoyed the freedom of being able to pick and choose her projects. Besides, did Louisville really need another arts group competing for the community’s attention?

But then the Louisville native and her husband, Brian Owens, along with Mike Brooks, former host and co-producer of The Late Seating at Actors Theatre, and Gil Reyes, whose extensive directing résumé includes relationships with Finnegan Productions and The Necessary Theatre, decided to stay in Louisville rather than pursue opportunities elsewhere. They all had years of theater experience on professional and semi-pro productions, often taking turns directing each other. Meanwhile, they had also turned 30 and were putting down roots. It was time to re-evaluate.

Suddenly, a long-term career goal of Attaway’s — to one day become artistic director of a theater — not only seemed attainable but necessary. A shared vision began to form.

Though nobody’s quitting their day jobs (Attaway as associate director of Actors Theatre’s apprentice/intern company, Brooks with the Kentucky Arts Council, and Reyes with Congressman John Yarmuth), the three collaborators are now co-artistic directors of Theatre 502, a fledgling theater company whose first show opens next month. Owens, whose busy travel schedule as a flight director with ZFX Flying Effects (think productions of “Peter Pan” all over the globe) precludes much directing, will serve as the company’s production manager.

“We all have a decade of grown-up theater experience now, we all know and love this town, and we know what we see. And what we don’t see are plays that really speak to people our age,” Attaway says. “Great theater cities have a lot of great theaters. It’s not just about our theater being great; it’s about the whole theater scene being greater.”

And so they’ve taken the time to lay the groundwork for a project they hope will last. Much of their aesthetic began to emerge in the fall of 2009, after Brooks directed Peter Sinn Nachtrieb’s “boom” and Attaway directed Reyes in Adam Bock’s “The Drunken City.” The four read scripts for more than a year after that, paying close attention to award-winning emerging playwrights like Nachtrieb and Bock, fresh talents who tend to push boundaries in terms of style and content.

“There’s space in the Louisville theater community for plays that aren’t ‘Guys and Dolls’ or ‘Waiting for Godot,’” Owens says.

Actors Theatre’s interim artistic director Sean Daniels is not only enthusiastic about the addition of this particular company to Louisville, he’s thrilled that the Theatre 502 team will have the same opportunities he had to grow artistically and professionally. In 1995, Daniels co-founded Dad’s Garage Theatre in Atlanta, and then served as artistic director from 1997-2005. The company has grown into an award-winning mainstay of the Atlanta theater scene, producing quirky fare like “The Change: Another Teenage Werewolf Musical,” which Daniels returned to direct in 2010.

“When I started with Dad’s Garage, being able to self-produce, direct and program a season gave me a greater understanding of what it takes to run an institution,” Daniels says. “Directing is the kind of thing that you have to make approximately 1,000 mistakes before you can really feel it, so it’s great to get started right away.”

Theatre 502 opens its inaugural season in September with Reyes’ production of Mat Smart’s “The Debate Over Courtney O’Connell of Columbus, Nebraska,” in which a small Midwestern town’s 19th century law gives any man the right to a public hearing to dispute his first love’s impending marriage to another. Audience votes will determine the winner of O’Connell’s hand.

Smart’s play is written to be staged in bars and other unorthodox spaces, and this production will move around town, with performances at The Bard’s Town, the Nulu Festival and other venues as a way of introducing the community to Theatre 502.

In October, Brooks will return to Nachtrieb, directing his 2007 ACTA/Steinberg New Play Award-winning dark comedy “Hunter Gatherers,” about a dinner party where the line between civilized and primal man is blurred, in the Victor Jory Theatre at Actors.

“We still have certain passions and instincts and desires and modes that we don’t want to acknowledge still rule us, just as they ruled us when we were still covered in hair and humping in caves,” Brooks says. “The story is fantastical and spins completely off the rails, but we’re seeing the kernels of the truth about ourselves.”

Nachtrieb’s most recent Louisville production was at Actors Theatre, his 2011 Humana Festival of New American Plays world premiere of “BOB.” And that’s no coincidence — playwrights the 502 directors tend to favor often premiere their work at prestigious festivals like Humana. But Actors Theatre only has so many open spots each season for plays that aren’t debuts, so there’s room for Theatre 502 to step in with subsequent productions.

Attaway will conclude the season in November with Marco Ramirez’s heavy metal drama “Broadsword,” the story of a defunct metal band reunited on the day of a member’s funeral, when mysterious strangers convince the survivors that the only path to salvation is to get the band back together to play one certain song.

Attaway directed Ramirez’s short plays in the 2009 and 2011 Humana Festivals, where she discovered an unexpected connection with the playwright’s work. “His plays are almost all about dudes and testosterone — things I know very little about, and comic books, which I also know very little about. And now heavy metal,” she says. “This play is about brotherhood and family and your roots and what it means to make something.”

“Broadsword” will open in a converted black box space at Iroquois Amphitheater, underscoring the group’s dedication to nontraditional spaces and venues.

Join Theatre 502 on Thursday at Patrick O’Shea’s (123 W. Main St., 7:30 p.m.) for a meet-and-greet with the founders and a sneak-peek performance of “The Debate Over Courtney O’Connell.”