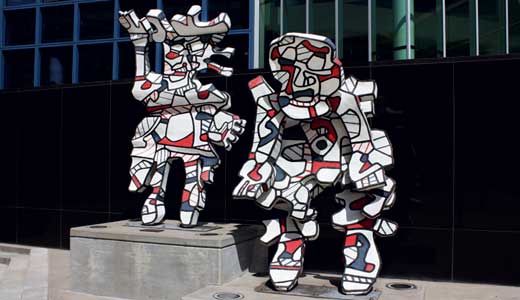 “They’re gone,” I said, stepping up to the entrance of the Kentucky Center.

“What? What’s gone?” my friend asked.

“The Dubuffets,” I answered, pulling open the doors, heading into the building to see a play. “The sculptures out front, they’re gone.” And as we took our seats, scanned the room and perused the playbill, I couldn’t stop wondering about them. Where could sculptures that huge be? Why were they moved?

Turns out the sculptures — “Faribolus,” named after the French word for nonsense, and “Perceval,” named after a knight from the legend of Arthur — are being cleaned and restored in Ohio.

According to David Holland, director of communications at the Kentucky Center for the Performing Arts, “This happened before, in 2000, when the Kentucky Center was undergoing a major addition. When we put on the South Lobby, we had to remove the sculptures from their outdoor location to do the construction work. At that time, we made the decision to restore the sculptures to minimize weather damage. This most current effort will address the same weather-related wear and tear. These are important works of art and should be taken care of.”

The sculptures are examples of Jean Philippe Arthur Dubuffet’s “L’Hourloupe” series. The figures began as drawings and paintings, but Dubuffet eventually took the two-dimensional shapes off the page. He produced small sculptures using hot wire to carve blocks of lightweight resin, a technique he found as easy to work with as “a pencil gliding over paper.” Eventually, Dubuffet established a studio and a team to manufacture large-scale versions of his models, creating shapes, each with their own energy and life, and reassembling them into figures. “Faribolus” and “Perceval” are human forms deconstructed on a two-dimensional surface and brought to life in a three-dimensional form. Our minds instinctively see a human outline, but the pieces aren’t human at all. Part folly and part portraiture, the sculptures fit snuggly into Dubuffet’s interest in the relationship between reality and fantasy.

“The works that belong to the ‘L’Hourloupe’ cycle are linked one to the other, each of them an element destined to become part of the whole. The cycle itself is conceived as the figuration of a world other than our own or, if you prefer, parallel to ours, and it is this world which bears the name ‘L’Hourloupe,’” Dubuffet said in 1973.

Dubuffet was formally trained but spent most of his career searching for true creativity, a quality he found alive in the art of children, prisoners and the insane, but rarely in the artistic elite. This was an extension of Dubuffet’s belief that “because of a very annoying intellectual trend that history rather inaptly called the Renaissance, artworks have been marked by a stilted pretentiousness which has deprived them of unrestrained fantasy, simple-minded frankness (and) adventurous improvisation.” The French artist coined the term l’art brut — art in the raw — to describe art with natural emotion and expression, qualities he strove to integrate into his own work.

A force of creativity that challenged the art world, even after his death in 1985, Dubuffet was a maverick. Individualism, experimentation and critiques of the art world are still debated in contemporary art today, a quarter of a century after Dubuffet’s death. Of course, the interesting twist on the story of Dubuffet is he, the challenger of convention, attained fame and fortune within the canon he criticized. But the historical significance of his work — and the work of other artists who experienced WWII, such as Bacon, Beuys and Giacometti — is a new artistic freedom found after the upheaval of a devastating war.

“Through this painstaking restoration, special care was given to repair weathered material and replace irreparable damage while leaving any need for restoration repainting to a minimum. The pieces will be delivered in good condition and displayed indoors so as to eliminate future exposure to the elements,” says Robert G. Lodge, president of McKay Lodge Fine Arts Conservation Laboratory Inc., the company doing the restoration.

But, indoors or out, we are lucky to have the “L’Hourloupe” sculptures in Louisville. Having two of them, on public view, is amazing. The sculptures will be returning in October, and Holland says the Kentucky Center plans to place them in the South Lobby.