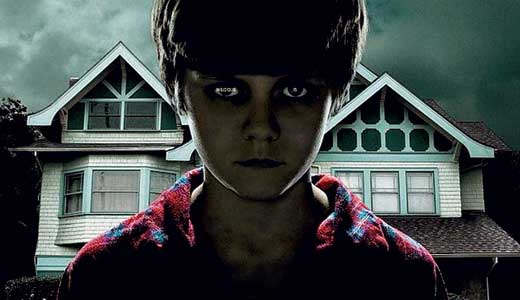 The original “[rec],” about a TV film crew who finds themselves quarantined inside an apartment building where a horrific virus has infected the residents, was the scariest damn movie we ever saw. This much-anticipated sequel picks up just moments later when medics and a SWAT team burst in and find that the building holds not just a virus, but something far, far worse! Is this one any good? Dunno. We’re too scared to watch it.

The guys from “Paranormal Activity” are back, this time with another nicely done PG-13 horror tale of a young couple whose comatose son has become host to dark forces from the spirit realm. Stars Patrick Wilson and Rose Byrne as the parents, with a cameo by Barbara Hershey. Boo.

A BIG BOX OF COWBOYS, ALIENS, ROBOTS AND DEATH RAYS

A quickie cash-in on the “Cowboys and Aliens” hoopla, this collection of eight sci-fi-Westerns from the Golden Age is still a hoot. Includes “Radio Ranch” with Gene Autry (from “The Phantom Empire”), “Ghost Patrol” and the sublime “Riders of the Whistling Skull.” We love these things.

For a band that practically owned the ’80s, Foreigner has demonstrated quite a shelf life, continuing to pack ’em in some 20-plus years later. Part of that appeal comes from new frontman Kelly Hansen, who has done a good job filling the shoes of Lou Gramm (and the 47 singers in between). Of course lead guitarist/mutant-ego Mick Jones is still around, but we miss King Crimson’s Ian McDonald, who left after the Head Games album. In any case, this is one of their best concert vids, now available on Blu-Ray.

We’ll be damned if we can figure out what is the connection between these two flicks, packaged together by Code Red Films. The first is the murderous Hixploitation title from 1975 about ignorant, gun-totin’, mouth-breathin’ mountain-dwellers who start a-shootin’ up the construction crew clearing land for a new park. The second is a 2001 horndog sex-comedy starring Jerry O’Connell, Shannon Elizabeth and Jake Busey! Whatever the link, it’s nice to see these two turkeys on the tube again.

From director Julian Schnabel (“The Diving Bell and the Butterfly”) comes another touchy-feely film about how amazingly peaceful women are. Freida Pinto from “Slumdog Millionaire” stars as the titular Palestinian girl, dealing with the Israeli-Arab conflict when her mother croaks. This leads her father to place her in a Hiam Abbass’ orphanage where she learns about peace, self-esteem and social consciousness with help from Willem Dafoe and Vanessa Redgrave. OK, so it’s a chick-flick; sue us, it’s a slow week.

A very strange, quirky little animated film about a man and his rescued pet, the titular German Shepard. The script could best be described as “lovely,” with great voice work by Christopher Plummer, Lynn Redgrave and Isabella Rossellini. Nice.

Seth Green and friends return with the third chapter in their “Star Wars” spoof. But this time they focus on just four characters — Emperor Palpatine, Darth Vader, Boba Fett and Gary the Stormtrooper — as they reveal untold behind-the-scenes tales from all six of George Lucas’ SW films. This thing is friggin’ hilarious.

Matthew McConaughey leads an all-star cast including Marisa Tomei, Ryan Phillippe, Josh Lucas, John Leguizamo, Michael Pena, Bryan Cranston and William H. Macy in this tale of a slick huckster/barrister (McConaughey) who runs his own private L.A. kingdom from the seat of his chauffeured Lincoln. But something doesn’t smell right about his latest case — it’s a setup! Breezy, fast and entertaining, just don’t try to follow the plot too closely.

A documentary on four men who met in Sri Lanka after the 2004 tsunami. With neither money nor experience, they rolled up their sleeves and became the saviors of a refugee camp — which promptly turned on them when money from a worldwide aid drive failed to arrive. But through sheer determination, they turned this second disaster around, rebuilding the village and restoring the locals’ faith. Inspiring, life-affirming and, frankly, exhausting.

UNCLE BOONMEE WHO CAN RECALL HIS PAST LIVES

Relatives arrive at a remote fruit and honey plantation to help a bedridden man. But he knows he is going to die, so he spends this time with his family in as pleasant a manner imaginable: letting his imagination run wild, entertaining them all with his tall tales and half-remembered stories. Or maybe that has nothing to do with this film at all. Frankly, there’s no way in hell we can explain this exotic Thai treat. You’ll just have to see it for yourself.

The wildly popular CG/motion-capture film from Japan, distributed in 129 countries at last count, and now available in a Special Edition. In 2077, Japan has closed its borders to work in isolation on outlawed cyborg technology, and much of the population has been turned into the robotic slaves of an evil corporation. Vexille, a female mecha operator, joins the opposition to raid Tokyo, hoping to find a way to set Japan back on the road to freedom.

This popular near-art-houser finds Elisabeth Shue as the doctor frantically trying to help phone-sex operator Sarah Roemer sort out her multiple personalities. But the film belongs to Roemer, whose character decides to lock herself away for 30 days … and commit suicide if she still isn’t straightened out.