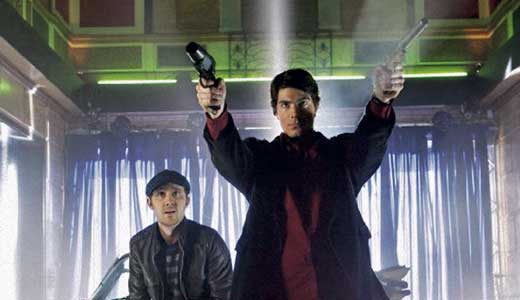 A goofy comic-booker starring Brandon “Superman Returns” Routh as a supernatural PI dealing with monsters in New Orleans. With a cast of werewolves, vampires, well-hootered Maxim mama Anita Briem, zombie assistants and wrestling-actor wannabes, you know this is a hoot. Big Dumb Fun at its best.

Jake Gyllenhaal is excellent, as always, in this deep and thought-provoking time-travel sci-fi/romance/thriller co-starring Michelle Monaghan. He wakes up with no memory inside a capsule where a video babe tells him he is part of a scientific experiment. He has been sent back in time and has only nine minutes to stop a terrorist bombing of the train he is on. Surprisingly funny and simply excellent on all levels, this is only the second feature by director Duncan Jones; his previous was the similarly deep “Moon.” Recommended.

Mark Hartley — whose compilation/doc “Not Quite Hollywood,” about the Ozploitation wave of Australian action/hooter movies of the ’80s, is a must-see for connoisseurs of crappy movies — returns with more great bad footage. This time he looks to the Philippines of the late ’70s for huge boobs (in front of the camera and behind), karate midgets, cigar-chomping bad guys and grade-school-reject monster costumes, all peppered with groovy ’60s music. What more could you want?

A wacky little comedy from … Algeria? Yep, that’s where we find Mournir, a man seeking the admiration of his village while stuck with a narcoleptic, and therefore embarrassingly unmarryable, sister. He gets drunk one night and tells everyone he has finally found her a fine husband, and the whole village goes into overdrive preparing for the lavish wedding. Now if he can only find a suitable groom …

While there have been a half-dozen previous versions of Riverdance, this 15th anniversary outing is our new favorite. It doesn’t have Michael Flatley (not a great loss), but it does have the clearest, sharpest visuals of any version to date, with similarly sparkling audio, all thanks to the latest state-of-the-art recording techniques.

An extremely slow-moving yet compelling adult sci-fi flick from Japan. In the future, an astronaut dies, but the company he works for has the legal right to clone him, so they do, completely freaking out his wife and family. But something is wrong with this clone, and he goes missing. So they create another. But the focus of the movie is on that uniquely Japanese view of personal identity centered around life goals and family, drawing the viewer into this other world while never really answering any of the questions it raises. Uniquely beautiful.

THE DEAD AND THE DAMNED

A wonderfully clunky indie-horror flick about an Old West bounty hunter who, while taking his Indian captive back to justice, is set upon by Gold Rush zombie/mutants in 1849 California. The mutation scene, triggered by a new-fallen meteorite, is loads of fun, as is long and lovely Camille Montgomery, whose acting talents are … just call them “evolving.”

Similar to Hitchcock’s “Rebecca,” but with a side of rice. Leon Lai loses his girlfriend, Bingbing Fan, in a car accident, then creates a shrine for her in his home. He is then forced to marry René Liu, who discovers the hidden room where the girl’s ghost resides, and the two make a pact to help him move on with his life. But making deals with Chinese ghosts never turns out well. Wonderfully slow-paced, human and terrifying.

Director David “Friends” Schwimmer knocks one out of the park in this indie tale of a teenage girl (stunning Liana Liberato), preyed upon by an online sexual predator (Chris Henry Coffey). An excellent drama that should be playing packed houses at the multiplex, it co-stars Clive Owen, Catherine Keener and Noah Emmerich.

WE ARE WHAT WE ARE

The Independent Film Channel brings us this wildly original and entertaining Mexican look at life, family and coping with cannibalism. When a loving father unexpectedly dies, his teenage children face an unusual hardship: He was the one who kept them supplied with fresh meat. Human meat. Oh, how will they survive? A clever combination of grisly gore and heartfelt emotion that starts a bit slow. Recommended.

Disney imported this neat Indian tale of an orphan boy, abandoned by his uncle and thought dead, who survives thanks to his belief that, deep down, he is a great hero in the making. He gets help from a “magic uncle” — a crazed scientist living in a haunted house — who invents marvelous gadgets, allowing him to help others as the superhero Zokkomon.