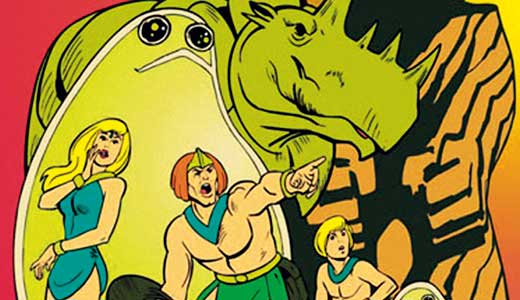 THE HERCULOIDS: THE COMPLETE SERIES

The narrator intones, “Somewhere out in space live … ‘The Herculoids’! Zok, the laser-ray dragon! Igoo, the giant rock ape! Tundro, the tremendous! Gloop and Gleep, the formless, fearless wonders! With Zandor, their leader, and his wife, Tara, and son, Dorno, they team up to protect their planet from sinister invaders! All strong! All brave! All heroes! They’re The Herculoids!” Man, there wasn’t anything better than being a boy in the ’60s. ’Nuff said.

THE JETSONS MEET THE FLINTSTONES

Finally available on DVD, this late-’80s mishmash of two great — if kinda past their prime — cartoon shows was something of a touchstone for many of us. That brash upstart, “Scooby-Doo,” had been making long-form features for a decade when Warner Bros. decided to jumpstart these franchises with their own 90-minute time-travel tale. Was it any good? Who cares! It was the friggin’ Jetsons meeting the friggin’ Flintstones, gosh-darn it! A must-own for any kid of the ’70s or ’80s.

This Lifetime cable movie is, like all Lifetime movies, a hokey, preachy bunch of nonsense aimed at old folks. That being said, it’s one of the more watchable ones, with yummy Nicole Gale Anderson as the slighted high-schooler who is accused of murdering classmate Lindsay “Yow!” Taylor after a revenge prank gone bad. “Fame” alum Cynthia Gibb plays her mom, and lots of now-famous co-stars add to the fun.

BAKA AND TEST: SUMMON THE BEASTS (SEASON ONE)

This low-rent anime series is admittedly silly, but that’s just part of its charm. (That and a weird sexual vibe.) In an academy where classmates battle by summoning mystical fighting avatars, the powerful Class A students get all the luxuries while Class F uses cardboard boxes for desks. But the Fs are underachievers, not idiots, and display amazing tenacity when they decide to succeed. Now available in a DVD/Blu-ray limited edition.

Damn fine, big-eyed Trieste Kelly Dunn stars with Cris Lankenau in this tale of a man who returns to his hometown of Portland, Ore., and meets up with an old flame who suddenly vanishes. He joins forces with a childhood buddy, and the two try to solve the mystery using their love for old detective novels as a guide. An interesting indie outing from the IFC.

A new direction for the Satellite of Love: A complete set of all their Gamera films! Of everything they skewered, barbecued or roasted over the years, nothing can match the perverted aroma of that giant, jet-propelled turtle. In fact, the pinnacle of MST3K’s entire series may well have been their tender, piano-laced love song that went, “Gamera is really neat, Gamera has loads of meat, oh we love you Gaaammerrraaaa!” With five discs and loads of special features, this is now our favorite MSTie set ever.

The original “Quarantine” was a remake of the Spanish “[rec],” both of which scared the crap out of us. “Q2:T,” however, is not a remake of the equally scary “[rec2]” sequel. “[rec2]” is heavy with religious themes and apocalyptic evil, while “Q2:T” goes off in its own direction, taking the killer contagion into the skies, infecting a jet full of passengers. Both films are terrific.

A flightless macaw is taken from its home in South America to be a pet in the United States. Years later, his owner discovers he is the last male of his species and tries to return him to the jungle. While not the most original CGI-animated flick we’ve ever seen, this is a fun tale of adventure, love, friendship and planetary stewardship, with voice work by Anne Hathaway, Jesse Eisenberg, will.i.am, Wanda Sykes, Jane Lynch, George Lopez and Jamie Foxx.

A straight-up vampire horrorflick, heavily inspired by “Zombieland”; but, instead of humor, this one strives to suck you in (if you’ll pardon the phrase) with its terrific teen-TV cast, writing and direction. The roving bands of violent religious extremists are a particularly good touch. Gangs-o-fun.

This horror-comedy import from Romania just blew us away. “Strigoi” is the belief that people who have been wronged in life can seek justice from beyond the grave, a myth that young Vlad has heard often in his village but never really believed. But now that the Communists have been thrown out of power, many of the old ways seem to be coming back. Very nice.

THE LEAST OF THESE

An entertaining little indie drama starring the underrated Isaiah Washington as a priest called to serve at his childhood Catholic school after another priest goes mysteriously missing. Worth checking out.

A very difficult movie to categorize. It’s the true story of a father and adult son, the latter of which has a brain tumor that prevents him from forming new memories. Therapists find that music — especially classic ’60s music — helps his condition, probably because he spent his youth traveling with the Grateful Dead. The two reconnect to one of the greatest soundtracks you ever heard. Don’t let the PG rating throw you, this is an excellent little movie that deserves to be seen.