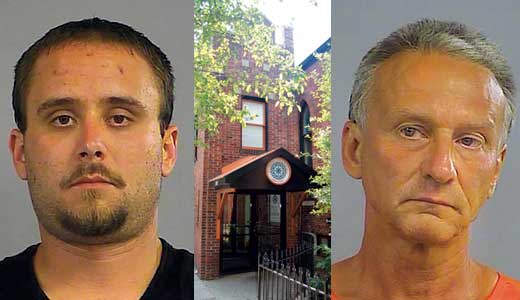 The night of June 16, 2008, was like most any other at Dismas Charities’ 124 W. Oak St. halfway house. Residents of the minimum-security facility — comprised largely of male and female drug offenders, some with violent criminal histories, some without — were winding down after a day of work that, for many, included sentence-commuting labor at city agencies that contract with Dismas. It was nearing 10 p.m., and residents were reading, doing laundry, preparing for bed.

Nothing, it seemed, was out of place.

Then the screaming began.

Two residents — Dee-Ann Elliott, 29, and Randy Bowman, 56 — had snuck into a basement-level restroom beyond the watch of the building’s closed-circuit camera network while a third inmate, Nicholas Thornton, distracted the facility’s on-duty security guard. While Thornton conversed with the guard — Matt Gilbert, who was away from the security monitors he was tasked with watching — trouble brewed in the basement bathroom where Elliott and Bowman, who had been rumored to be a couple, began fighting. The argument escalated. Bowman pulled out an ice pick he had likely smuggled into the facility via his day job at a local Goodwill and proceeded to stab Elliott to death. As she lay dying on the bathroom floor, Bowman escaped the building, yet only made it a few blocks before he and the ice pick were recovered by Louisville Metro Police.

It is at this point in the story that local media had extracted all it could from Elliott’s murder, airing a handful of mug shot-laden stories before the 24-hour news cycle had gleaned its fill and moved on to the next tragedy. Bowman was charged with murder and tampering with physical evidence; he pleaded guilty and was sentenced to 45 years in prison. Thornton pleaded guilty to complicity to facilitation of murder and was sentenced to five years.

Elliott, who had been convicted in 2005 of conspiracy to carry and use a firearm during a violent crime, would not live to finish out her three years of supervised release at the Oak Street house.

But Elliott’s death signaled the beginning of a different story, one that has taken years to play out and represents for Dismas the latest charge of malfeasance levied against the embattled nonprofit: In an ongoing civil suit filed in Jefferson County Circuit Court in 2009 by Elliott’s daughter and her legal guardian, Dismas and Gilbert have been formally accused of playing a role in Elliott’s death. The wrongful death suit alleges the company “negligently failed to train and/or supervise Gilbert,” whose job was to monitor residents on the surveillance network, and that its apparent failure to maintain a secure environment in the Oak Street halfway house contributed to the violent altercation which claimed Elliott’s life.

Dismas is no stranger to bad publicity. In August 2010, the company’s executives were roundly criticized for a series of lavish expenditures reported by the press, not the least of which was the purchase of more than $90,000 worth of luxury suites at the newly minted KFC Yum! Center. Because the company is primarily funded with state and federal taxpayer money, the largesse concerned the office of Kentucky State Auditor Crit Luallen, who in April of this year released a scathing audit of the charity that found numerous issues and concerns with its business practices, including a lack of sufficient whistleblower statutes and nonexistent fiduciary oversight training of executive staff, as well as an overriding, insular culture of executives who act more like CEOs of private companies than stewards of public funds.

Luallen’s office experienced great difficulty wrangling anything from Dismas’ legal grip, telling LEO Weekly at the time that “there was a lack of cooperation (by Dismas) in providing adequate information, adequate access to staff and adequate documentation” with regards to the auditing process, and that directly interviewing employees was strictly prohibited.

Playing hardball appears to be standard operating procedure for Dismas when it comes to calls for transparency. According to court documents pertinent to the wrongful death suit, Dismas is treating the plaintiff’s attorney much like it did the Office of the State Auditor by denying access to information, documentation and staff. Not only has the charity repeatedly fought motions compelling them to release relevant documentation (e.g. employee training materials, security videos, etc.), but it is also utilizing other tactics like invoking a confidentiality agreement that prohibits employees from revealing “trade secrets,” thus limiting the ability of the plaintiff to ask basic questions — for example, how did an ice pick make it into the building? — and, according to the plaintiff, abjectly intimidating an employee being deposed by the court.

A deposition from Barbara Strahm, Dismas’ then-director of the Oak Street facility, reveals the extent to which her former employer will go in the name of “trade secrets.” Strahm told the court that Dismas has had a “chilling effect” on her ability to comply with the plaintiff, and explained her concern over answering questions: “I’m not suppose to answer (sic),” she stated, adding that the company is “just vindictive.” Dismas’ attorney, Ian Ramsey of the law firm Stites & Harbison, routinely objected when Strahm spoke, particularly when asked whether she had difficulty firing Gilbert despite repeated infractions and whether running a co-ed facility poses unique challenges; all objections were made on the grounds of “trade secrets.”

Then there is the issue of the surveillance footage itself, which represents the combined video feed of the approximately 15 cameras throughout the facility. One of those cameras is located inside the building’s central monitoring office (CMO), and is used by the facility’s director to keep a watch on the watchmen, so to speak. According to testimony from Dismas’ Regional Vice President Faith Good, the hard drive containing footage from June 16, 2008, was removed immediately following the murder (before Strahm could review it) and sent to Dismas’ corporate offices on South Seventh Street Road. Copies of the footage were made and given to LMPD, except for one thing: The camera angle for the monitoring room was missing, making it impossible to know if any of the on-duty resident monitors (including Gilbert) were in the CMO at the time of the murder.

“It is concerning that this important camera recording has not been provided when it is known to exist and the Defendant’s corporate office has it,” reads a motion filed by the plaintiff. “This videotape would show what the Dismas employees were doing at the time of the murder.”

Dismas has yet to produce the coveted camera angle, its counsel claiming it doesn’t exist despite the claims of Strahm and Good attesting that a camera does, in fact, exist in the monitoring office.

It would be easy to heed claims that Elliott’s murder, and the potentially negligent climate that precipitated it, was an isolated incident were it not for the multitude of improprieties committed at Dismas halfway homes across the nation, whether by residents or, in some cases, employees themselves, running the gamut from allegations of rape, to drug use by residents at the halfway house, to embezzlement by those affiliated with the nonprofit, to worse.

In early June 2010, Dismas house resident David Bennett was accused of raping a counselor in their St. Albans halfway house in West Virginia. In March 2011, a chemical-dependency contractor, Ismael Hernandez Sanchez, allegedly bilked the unwitting Dismas treatment facility in Midland, Texas, out of taxpayer money for services he never rendered. In 2009, Rafael Vega allegedly coordinated a kidnapping scheme — resulting in the brutal torture and fatal mutilation of a Mexican drug lord — while staying at a Dismas facility in El Paso. In August 2010, Lubbock, Texas, Dismas staffer Mose Lewis was indicted for performing oral sex on a female resident and making a false statement to investigators.

Lastly, and closer to home, there were the numerous improprieties carried out by Dismas workers — inmates with whom the city contracts for the low-low price of 63 cents a day in exchange for commutation of a sentence — during employment at Louisville Metro Animal Services under Gilles Meloche, and his successor, Wayne Zelinsky, both of whom resigned amid controversy. Multiple LMAS employees reported improper sexual conduct between Dismas workers and city employees, in addition to drug abuse on city property and mistreatment of animals, among others.

This isn’t to say that every apple in Dismas’ bunch is rotten, but the appearance of systemic failures in facilities the nation over doesn’t bode well for public relations.

Both Dismas and lawyers for the Elliott case declined to comment for this story, citing a protective order requested by the nonprofit that prohibits them from speaking about the case as per the restraints of so-called “trade secrets.” The trial date has been set for March 27, 2012, and the suit is expected to be argued in front of a jury, with a twist: Dismas has filed a third-party complaint against Bowman and Thornton — the murderer and his accomplice — in an effort to spread the blame.

For an organization founded in 1964 to rehabilitate criminals into productive members of society, suing them is an interesting way to go about it.