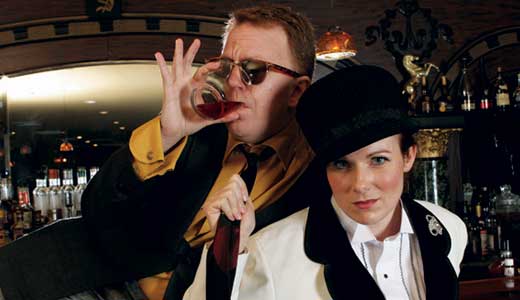 ‘As You Like It’
Part of the annual Kentucky Shakespeare Festival. Directed by Rob Clare. Continues through July 10 in Central Park, 1340 S. Fourth St. For more information, go to www.kyshakespeare.com.

Now in its 51st season, the Kentucky Shakespeare Festival pays homage to its early roots with a likeable, 1960s-flavored production of “As You Like It,” which opened Thursday under the direction of Rob Clare with nods to the decade in Sue Makkoo’s stylish costumes and Jon Becraft’s delightfully quirky sound design. The play itself also works as a metaphor for that tumultuous period, as we leave the uptight city court and enter the freewheeling forest, where love and freedom reigns.

“As You Like It” is a crowd-pleaser of a romantic comedy featuring exiled nobles, earthy shepherds, cross-dressing disguises and meditations on the exquisite pleasures and tortures of love. Orlando (Bryan Austin) and Rosalind (Madison Dunaway) fall hard for each other at first sight but soon end up separately exiled to the Forest of Arden — Orlando by his brother Oliver (Adam Navarro) and Rosalind by her uncle, Duke Frederick (James Bould, who also plays his banished brother). The duke’s daughter Celia (Laura Rocklyn) won’t abandon her cousin, so they set off together in disguise to ward off would-be predators — Celia as a poor maiden and Rosalind as her brother, Ganymede, accompanied by Touchstone (Kevin Rich, who plays the conscious fool with a knowing, wisecracking grin).

The power of the forest changes lives and reverses fortune, but love prevails in the end. Central Park’s towering oaks and blinking fireflies offer the perfect backdrop for Shakespeare’s idyllic Forest of Arden, but unlike other nature-bound plays like “A Midsummer Night’s Dream,” which offer the actors plenty of built-in action, “As You Like It” is as chatty as a drawing room comedy of manners. It also plays with many of the conventions of the pastoral genre, with maids and gentlemen romping aimlessly around the countryside. One dramatic hurdle such productions face is the vast number of scenes that consist primarily of people standing around talking, interspersed with the occasional wrestling match or musical number. The more stationary scenes can create a drag on the show’s pace that even the most spirited monologue can’t resolve.

That said, Clare makes the most of the scenes specifically written for physical comedy — Audrey the bawdy shepherdess (Jess Milewicz) is a raucous delight in her scenes with earthy Touchstone, and her goat flock nearly steals the show. More quirky, funny choices like the goats would have been welcome, especially since the script offers ample room to invent.

But we return to Shakespeare’s plays for his language, epitomized in this work by melancholy Jacques’ “all the world’s a stage” monologue. As Jacques, John Innes, a veteran of Canada’s Stratford Shakespeare Festival, keeps the comedy grounded with his grave understanding of the fleeting nature of time and experience.

Though the entire cast deserves every round of applause they received, “As You Like It” is Rosalind’s play through and through. Dunaway’s spirited performance really shines once Rosalind casts aside her society girl frocks in favor of pants, allowing us to see how the Ganymede disguise both liberated and constrained her. As sidekick Celia, Rocklyn is a spunky delight, and she and Dunaway enjoy a chemistry that makes their comedy look deceptively effortless.

Producing director Brantley Dunaway is on a mission to upgrade the audience experience in Central Park, which traditionally leaned a bit to the rustic. A few rows of Adirondack chairs comprise the amphitheater’s new reserved front seating area, available for a $20 donation, which includes waiter service from the bar. Yes, the bar — you can now sip bourbon on the rocks or a BBC beer while watching a play under the stars, just as the Bard himself surely intended.