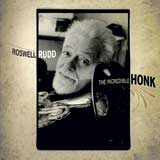 The familiar swonky trombone you hear consistently throughout jazz veteran Roswell Rudd’s new album has ventured far outside the studio. Rudd injects his instrument’s voice into cultures that don’t often see a trombone. A collective of diverse musicians and vocalists accompanied him on these travels, utilizing West African chants and traditional Western instruments. Rudd says he’s never taken a musical journey like this before but, like any good traveler, he navigates through melodies that take on the feel, style and atmospheric pace of their location, an approach that’s reminiscent of Sketches of Spain. All of these seemingly unrelated elements are bonded cohesively by Rudd’s rattling trombone, swonkin’ away. With an album titled The Incredible Honk, it’s easy to appreciate the light-hearted appeal of hearing a woman sing “I’m going to pee now.” He proves to be immovable from his avant-garde mindset, even at age 75.