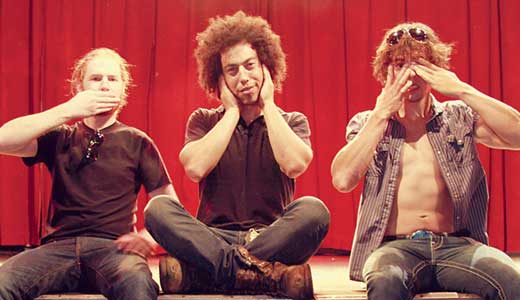 On April 13, 2010, The Broken Spurs anxiously waited backstage at Freedom Hall. The arena was packed to capacity, with 20,000 people eager for the band to play. This wasn’t just another show — they were opening for AC/DC.

As the lights dimmed, guitarist Benny Clark expressed his fervor, letting loose a scream that echoed throughout the horseshoe-shaped arena, inciting the crowd into a frenzy until the band walked out to what vocalist/guitarist Adam Kramer calls “an inferno of voices, willing, ready and wanting to rock.”

So after all was said and done, how did it feel for The Broken Spurs to play on the same stage as a band they’ve looked up to for years?

“That was like the orgasm of a dream come true,” Kramer recalls, after immediately listing AC/DC as one of his main influences, along with the Rolling Stones and Led Zeppelin. It’s clear he is not just name-dropping; these influences drip from The Broken Spurs’ music.

They play dirty, gritty, raw rock, bursting with energy and liveliness. It’s not a jeering image of the 1970s, nor a cheap replication. Hearing stylishly unpredictable vocals layered over hammering guitars, it only makes sense that they share a stage with rock legends.

Since the band’s inception in 2006, this is what they’ve worked toward. “The goal of modern rock, of playing shows and creating really great rock ’n’ roll, was always at the forefront,” Kramer says. As what he calls “the hardest-working band,” The Broken Spurs have been pushing nonstop to meet this goal since they started playing. This work hasn’t gone unnoticed: They recently released their second album, Natural Disaster, after being signed to Louisville-based sonaBLAST Records. But it’s not break time — Kramer says they already have about 30 new songs ready for their next record.

Despite this constant nose-to-the-grindstone work ethic, Kramer says the future of The Broken Spurs is not clearly outlined. “I don’t know if we’re people that actually have a vision of the future so much as we continue to create to the best of our ability, and our abilities constantly grow,” he says. “It’s beyond us.”

Although reluctant to map out a specific path, Kramer sees no limits for The Broken Spurs.
“We’re a band that’s going all the way,” he says. “Nothing is stopping us.”