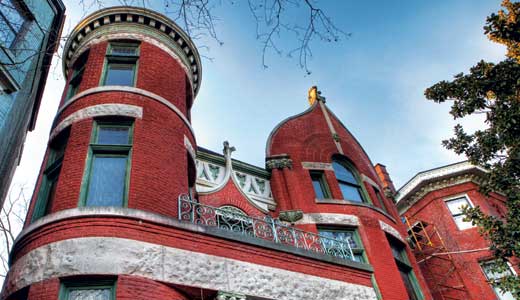 R. Kelly’s “Love Letter” tour stops here Saturday, which will mark the fourth time I have found myself in tenuous finances when the Pied Piper of R&B visits a city I’m in. I’ve never been able to afford a ticket to a Kelly show, but I’ve consoled myself so many times with the ineffably and inexhaustibly wonderful “Live in Oakland” DVD, shot during his 2008 tour of smaller theaters, that I feel confident in assuring you that if you can make it Saturday, there’s not a chance of disappointment. Certainly some of the intimacy fans felt at his 2009 Louisville Palace appearance will be lost in the monstrous maw of the Yum! Center, but there is an undeniable grace in the man who brought us “Double Up” stepping into the chapel of the Double Down. Let the R. do this. —Nathan Salsburg

LEO: How would you describe your music to someone who hasn’t heard you yet?

Brian DeGraw: Like the sun melting sand into tinted glass … with a lot of drums.

My interview with Gang Gang Dance’s keyboardist (which can be read in full on LEO’s music blog at bluecat.leoweekly.com) confirmed what I had already assumed about the New York-based band. The highly acclaimed group has evolved from pure art project into something more musical over the past decade; by marrying their conflicting urges, they have elevated their art without sacrificing their far-left-of-center impulses. “I feel inspired by music that hits me in the right places — that’s all it is. I don’t like to think too much in terms of regions or genres.” When pressed by his overly zealous interviewer, DeGraw replied, “I’d say we are experimental music that has been seduced by pop. It’s a naughty affair.” —Peter Berkowitz

In the midst of a 48-hour power blackout that thrust the northeastern United States into darkness and chaos in August 2003, New York City-based energy reporter Amanda Little had an epiphany. “Nothing I’d learned in my reporting had quite prepared me for the feeling of utter helplessness and paralysis that a blackout of that scale would cause,” writes Little in the introductory chapter of her book “Power Trip: The Story of America’s Love Affair with Energy.” “It was the first time, for me and for millions of Americans, that the story of energy was conveyed in human terms.” Thus began her examination of how our lives — and the appliances and gadgets that populate them — are tied to tenuous energy grids and a reliance on fossil fuels. Little will discuss her book and other energy-related issues with Louisville’s green auteur Gill Holland at the Louisville Free Public Library’s Main Branch in a free, ticketed event that will likely make you feel guilty for driving there. —Jonathan Meador

They’re simple images — a stiff glass of bourbon and a thick, round cigar. They remind us of simpler days — when Groucho Marx was on evening TV and Frank Sinatra sang through radio speakers. Friday night, those days will live again in hearts, minds, glasses and lungs at Asiatique. The Bourbon Review is sponsoring a tasting of all things Sinatra and Marx. A ticket gets you three drinks (from sponsors Angel’s Envy, Buffalo Trace and Eagle Rare), three handcrafted cigars from Black Patch Cigars, a copy of The Bourbon Review’s summer issue, and food from a special bourbon-inspired menu, prepared specifically for this event. So come in, have a seat, let the night go down as slow as that first sip of bourbon, and watch it burn down like a good cigar. —Brent Owen

According to history buff David Domine, Old Louisville is quickly gaining a reputation for being the most haunted neighborhood in the country. “Old Louisville is the perfect spot for a ghost tour, because nowhere else in the country do you find such a high concentration of Victorian homes,” he says. “And everyone knows Victorian homes naturally come with ghosts.” Domine, author of “Ghosts of Old Louisville,” leads a Full Moon Ghost Tour every month that highlights the unique architecture and spooky stories of the historic neighborhood. Domine says his favorite tale is of the “Lady of the Stairs,” whose ghost still waits for her beau on the steps of the First Church of Christ at the corner of Third and Ormsby. This month’s tour is Friday night. —Sara Havens

We can argue all day over who sings it best — Bernadette Peters? Dame Judi? Streisand? Zeta-Jones? — but at the end of the night, “Send In the Clowns” is not an academic exercise, it’s a nakedly honest admission by an experienced woman who’s lived through no small number of regrets. It’s a true heartbreaker, and Stephen Sondheim’s Tony Award-winning musical “A Little Night Music” has no shortage of such moments. The As Yet Unnamed Theatre Company will remind us why Sondheim remains the gold standard for musicals this month with a two-week run in the MeX Theater. As meditations on love set in weekend country houses go, it’s no lighthearted romp, but if desire and regret go hand in hand in your world, you’re already a goner for the sophisticated, enchanting story and music. Pro Tip: If your ex is in the show, consider leaving the new wife at home. —Erin Keane

“Point Break” may have made more than $97 million in 1991, but we can’t ignore the absurdity of the premise. As summed up by everyone’s favorite movie source, imdb.com, it’s about “an FBI agent who goes undercover to catch a gang of bank robbers who may be surfers.” This absurdity is not lost on members of the Alley Theater acting company and Louisville’s improv group Damaged Goods; it’s exactly what they’re playing up in “Point Break Live!” For the third time, the self-proclaimed “absurdist adaptation” of this movie is coming to Louisville, this time directed by Damaged Goods member April Singer. If you’ve ever thought you could be a better actor than Keanu Reeves, here’s your chance: Each performance features an audience member, unrehearsed and random, in what was Keanu’s leading role of Johnny Utah. —Brandi Terry

Routinely referred to as an “everyman” of Hollywood’s Golden Age, actor Jimmy Stewart is a bit short-changed by this description. There was nothing typical about many of his roles — in fact, some were a little weird. In the 1950 film “Harvey,” Stewart hangs out in bars with an imaginary 6-foot-3 bunny. He famously played an obsessive peeping Tom in “Rear Window” (1954) and a suicidal banker with a guardian angel in “It’s a Wonderful Life” (1946). These and a number of other Stewart movies will begin screening Friday at the Louisville Palace. The films will show Friday and Saturday nights through late August, comprising roughly 25 years of the actor’s career. The series will show the better-known Alfred Hitchcock and Frank Capra classics, as well as selections from Stewart’s prewar films. The series opens Friday with 1938’s “You Can’t Take It With You” and continues Saturday night with Stewart’s 1939 breakout, the Capra-helmed “Mr. Smith Goes to Washington.” —J. Christian Walsh

You can’t completely blame this on Brian Wilson. Or Lennon/McCartney (despite the band name). Or even XTC (though we’re starting to get close there). California combo Hellogoodbye treats every song like it’s their one chance at a chart-topping single about infatuations found and lost. They play and arrange the heck out of all of their songs — pretty much putting the listener on one three-minute roller coaster ride after another. This plays well on the Warped Tour, of course, where you can sample multiple flavors of pop-punk in constant rotation. But in a small venue like The Vernon Club? Hellogoodbye have the answer: Bring a bunch of warm-ups along to keep the pop assault fresh ‘n’ varied. So Fences, Fake Problems and A Great Big Pile of Leaves round out this version of a post-emo barnstorming concert bill. And they’re all gonna make you want to dance. Bring appropriate footwear. —T.E. Lyons

‘The Story of Charlotte’s Web’

Go look around the office of most anyone who writes professionally, and you’ll see “The Elements of Style,” the paradoxically concise summarization of the dos and don’ts of prose. In that room you might also find “Charlotte’s Web,” the poignant and rather mature tale of a freely communicating extended family of barnyard animals. Both of these books were created by E.B. White — one of the most memorable individuals among the New York City magazine scene of writing/editing/publishing sophisticates. A biographical study of White has just been published, and Carmichael’s is hosting a reading/signing with author Michael Sims. “The Story of Charlotte’s Web: E.B. White’s Eccentric Life in Nature & the Birth of an American Classic” shows how the famously shy White mined his detailed childhood observations of the outdoors into lasting stories of sacrifice, silliness and friendship. —T.E. Lyons

The Kentucky Museum of Art and Craft is featuring two exhibits that seem different on the surface, yet both illustrate how art that was once thought of as out-of-the-mainstream has come into its own. The 10th Shands Kentucky Artist Series features landscapes, portraits and still-lifes by Owensboro folk painter David Sharpe in his first solo show. “Sharpe’s intuitive senses are uncanny,” says folk-art dealer Carl Hammer, “as if he were working purely from an instinctive, compulsive-obsessive tradition.” The second show features more than 20 artists using traditional materials with computers to create fiber art, glass and ceramics. An example is the “Voice Knitting Machine” by the German arts collective Trikoton. They made a 1970s mechanical knitting machine respond to voice commands. The words are translated into designs woven in the fabric. —Jo Anne Triplett

A new carnival has come to town. Before you run out in the streets looking for the rides, games and chili dogs, I need to tell you this carnival is tiny and made of glass. But kids, little and big, will love it. Flame Run wanted to do an exhibit to introduce children to glass art, other than hearing the parental standard of “keep your arms by your side.” Owner Brook Forrest White Jr. decided that phrase needed changing. “I wanted art that a 5-year-old could get excited about,” he says. Ten percent of the sales of work by the 25 artists will be donated to the Children’s Hospital Foundation. White has a personal relationship with Kosair Children’s Hospital, as his twins were born prematurely and treated by Kosair doctors. —Jo Anne Triplett