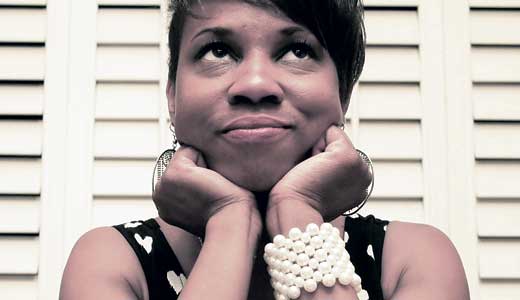 In times long past, only the most powerful had pictures of themselves — only they could afford to commission a portrait. Now, in a nation where most people have endless photographs of themselves, a new exhibit returns to these portraits of the past to examine just how power was depicted.

Using the concepts of French philosophers Gilles Deleuze and Felix Guattari, students have analyzed themes and issues revolving around presentations and depictions of power in creating the portraits exhibited. Students examine identity and alternative power structures, the role of gender and class, contextual environments and associations, expression and psychology. —Brandi Terry

When most of us think of glass art, we think of objects of a certain size. To appreciate the glass now on display in Louisville, you’ve got to go much smaller.

The International Society of Glass Beadmakers is in town for their 19th annual conference. Locations with exhibitions include Gallery Janjobe and Flame Run Glass Studio.

Both opening receptions from 6-9 p.m. during the July 29 FAT Friday Trolley Hop are open to the public. —Jo Anne Triplett

Baltimore’s Lower Dens formed when singer-songwriter Jana Hunter needed members to fill up her live band. One rhythm section later, a new band was born, one more expansive and versatile than any solo act could hope to be. The band’s first album, Twin-Hand Movement, was released last year by Gnomonsong to much acclaim. Hunter is described by her label as being known for “intimate, ghost-heavy weird-fi,” which is about as good as a description as I can come up with. They cite late-’70s post-punk acts like Wire and Joy Division as influences, though it’s worth noting that they are mostly associated with the freak folkers. There’s no country here, though. This is urban-dread love music, full of tension and, occasionally, release, so take some downers and mellow out, brothers and sisters. — Peter Berkowitz

Dave Waite — a Cincinnati native — is a familiar face on the local comedy circuit, having worked Louisville stages for years. Now living in New York, Waite has been building a reputation there as an up-and-coming comic. After releasing a new album, Kaboom, earlier this month, Waite will be returning to Louisville to headline the Comedy Caravan this weekend. He’s dry, cynical and just a hair on the raunchy side. He is charming and seemingly benign onstage, but there is an awkwardly confident swagger just below the surface, often leaving him hilariously stomping, pounding or parading around the stage during his set. Take note, Louisville: This is definitely one of those rare opportunities that will allow you to say, one day, “I saw him when … ” —Brent Owen

Sorry, Woody, we all know that’s not going to be the way it plays out, for you or for any of us. But art plays a role in making a loved one’s passing more tolerable for family and friends, as this group exhibition shows. Sculptors Wyatt Gragg, David Kocka, David Lind, Raymond Graf, Guy Tedesco, Matt Weir, Don Lawler and Craig Kaviar have created ways to remember the deceased and comfort the living.

The reception is during the July 29 FAT Friday Trolley Hop, from 6-9 p.m. —Jo Anne Triplett

This Piano Plays Itself

OK, let’s be honest — that piano had a little help, mostly from bassist and sampler Doug Saylor. This Piano Plays Itself is a self-described post-psychedelic shoegaze band. These Georgia boys mess around with vocals and sampling to create a sound all their own: a mix of “post-rock and electronica jams (arranged) in more conventional structures that utilize vocals/lyrics and create a really cool hybrid.” Since their 2008 debut, the band has run up and down the East Coast jamming on a wall of noise guitar that quivers with a heavy dose of reverb, weaving in and out of a mesmerizing haze of guitar effects and synth riffs that explode into moments of lyrical clarity, as singers Eric and Jayson croon about storm clouds over a burbling acoustic guitar. — Jennifer Harlan

The intent of this, the latest in a thankfully never-ending stream of art/bands/beer events, is to support Planned Parenthood of Indiana. If this doesn’t speak to your interests, move on, it’s a free country. The organizers state, “The goal of this group exhibit is to showcase artists with a message.” Such artists have been invited to participate by expressing their take on pressing issues of the day (just like the hippies did!), such as the economy, the wars and other “natural” disasters. “From the creation of art, we can open conversation and reach new depths of communication,” they pledge. And did I mention the beer? New Albanian Brewing Company will be selling their drinkable art, and bands like Shawn Sleeps Naked and Bunny Day and the Mercy Buckets will provide the aural art. — Peter Berkowitz

A lot of homicide procedurals — whether on page or screen — coast along on their gimmicks. But for 40 years, Edward Mercer solved crimes with neither 3-D glowing-screen technology nor assistants with dragon tattoos. And after serving as chief investigator for Kentucky’s attorney general and as our local chief of detectives, Mercer now makes use of a private-eye badge and a storyteller’s word processor. He’ll be reading from his novel “The Dead Stroll” at a signing event this weekend at Carmichael’s. The setting is Louisville in the late 1960s; the rapid social changes of those times didn’t help make homicide investigations any easier. The book benefits from Mercer’s observations on hundreds of cases — and a portion of the purchase of each copy will benefit the Metro Police Foundation. —T.E. Lyons

The man. The legend. Live and in your town. Jesco White, the subject of many a cult film (Dancing Outlaw, The Wild and Wonderful Whites of West Virginia), is bringing his family’s tap-dancing style to the Headliners stage. A multi-media presentation will highlight his iconic life, with documentary and family footage intertwined with tap-dancing songs and live accompaniment from Dan Deel. Emceed by “Wonderful Whites” producer and family friend Storm Taylor, this hellbilly showcase also features Knoxville’s Pick Up the Snake and Roger Alan Wade, who penned songs for country legends from Cash to Jennings and has spread his name far thanks to his cousin Johnny Knoxville and their “Big Ass Happy Family Jubilee.” Rumor has it that the biggest and the baddest, Ms. Mamie White, will also be in attendance. —Tracy Heightchew

Looking to score karma points this weekend while enjoying some fun in the sun? Then head over to Central Park with your favorite four-legged friend. Local animal advocacy organization Saving Sunny Inc. is throwing an all-day, pet-friendly art and music fest to raise awareness for the pit bull rescue movement, which founder Kelsey Westbrook describes as “a civil rights movement for animals.” There will be fun and games for you and your pooch, including a puppy kissing booth and a costume contest (only for the dogs, sorry). Enjoy a slew of yummy local treats and hang out with celebrity guest of honor Shorty Rossi (Animal Planet’s “Pit Boss”), who will be there with his own pit bull, Hercules. Best of all, the proceeds benefit animals in need. Food, fun and helping out Fido. —Jennifer Harlan

She may live in Phoenix now, but Teneia Sanders will always be a Louisvillian. She single-handedly kept me in Stevie Ray’s with her gentle playing, soulful voice and perfectly positive disposition. Hosting all those open-mic nights could have left anyone jaded and sarcastic, but not Teneia. If a newbie got stuck on stage, she’d be right there to help push them along with a kind word or a background vocal. Her long-awaited sophomore album, Confessions of a Scorpio, is ready, and she’s back in town to celebrate the release the only way she knows how: guitar in hand. We’ve already gotten a taste in the form of first single “Love You Thru Words” and “Stand,” featured on HBO’s “Prom Night in Mississippi.” She’s backed by her longtime Louisville band the Hi-Jackers. —Damien McPherson

Desert Danger is smart, responds to commands and could make a great hunting companion. Trick Melon is well mannered and sports a cute trot — perfect for polo. Lil Nip of Gin is laid-back but loves attention, making her an ideal candidate for 4-H. These retired racehorses are among many in need of a new line of work and a permanent home, a mission O’Shea’s Irish Pub is helping to promote. On Monday, the philanthropic watering hole is donating 100 percent of its net proceeds from food and drink sales to the nonprofit CANTER KY, a wordy acronym for an organization dedicated to saving retired racehorses from an otherwise grim fate. Local band Klondike & The Slow Rush will provide the tunes while you imbibe for a good cause. —Sarah Kelley